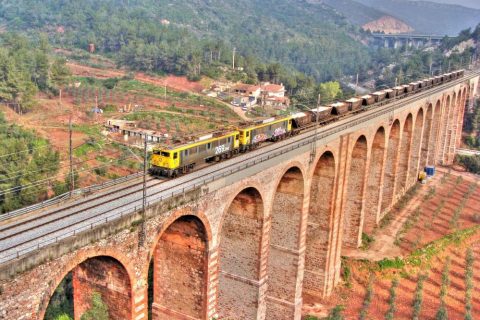 2018: the year of multimodality, masterplans and strikes

2018 was the European year of multimodality and many events have taken place around this motto. The importance of rail in reducing CO2 emissions gained more attention and the lessons learnt from last year’s Rastatt disaster translated into meaningful actions taken to improve the European railway network.

At the same time, 2018 was also the year of the Genoa bridge collapse, three months of French railway strikes, uncompromising discussions about the approaching Brexit and new sanctions on the potentially important transit country Iran. This is an overview of some of the most important trends and events in the rail freight industry.

Rail freight on the rise

Global rail freight volumes rise with 2.8 per cent in 2018, accounting for an additional 1.3 million tonnes. That as the prediction of Panteia, a Dutch research institute in August. Although actual figures usually come after the first quarter of the next year, the prediction is that freight movement was in the lift this year.

The research firm cited the prospective lowering of track access charges in the Netherlands and Germany in 2019 as a key factor stimulating growth. In addition, there are several initiatives likely to push the sector further, such as experiments to operate longer trains (740-metre trains) on an international level, they argued.

The European Commission this month approved the German aid scheme meant to compensate rail freight operators for up to 45 per cent of their track access charges (TAC’s). This is part of the larger German Masterplan for Rail Freight, aimed at boosting its rail freight industry over the next few years. In November the German government selected 29 rail projects to be prioritised and implemented by 2030.

The German initiatives ignited the ambitions of the Dutch counterparts. If Germany reduces the costs of rail, similar measures must be taken in the Netherlands in order to guarantee a level playing field, argued Dutch stakeholders. In June, this plea received positive response. A measure package was presented. With a grant of 12 to 14 million Euros per year starting in 2019 and up until 2023, the Dutch TAC’s should be considerably reduced. Moreover, funds are allocated to the transition to ERTMS and modifications to enable driving with longer trains.

According to Ralf-Charley Schultze, President of the International Union for Road-Rail Combined Transport (UIRR), these developments are crucial for the success of rail freight as they respond to the need to compensate rail freight’s disadvantage over road. propositions. “While rail freight must improve its performance, and it has been working on it, all efforts will be futile if the price is not right.”

Although similar programmes have been implemented in Austria, France and Italy, this year also marked developments in an other direction. The UK government presented its 5-year plan, including a recommendation for a charge increase after a two-year freeze. This year was also the first time the track access charges for Swedish railway were under review, leading to a critical stance towards the relatively low marginal cost in the country. The cost of rail may change, depending on the outcome of the debate.

This year important agreements were signed to protect the environment on a global level, which opened an opportunity for rail to distinguish itself from other modes of transport. “Rail is the most carbon-efficient motorised way to travel: CO2 emissions from rail account for less than 3 per cent of CO2 emissions from transport although it carries 17 per cent of inland freight”, noted the European Railway and Infrastructure Companies (CER) in October. This message seems to have gained further recognition in 2018, when several deals were signed.

On 14 December, the Rail Freight Forward coalition was launched in Katowice, Poland. European rail freight companies committed to reducing the negative impact of freight transport on the planet, embracing the objective to reach a modal share of 30 per cent for rail by 2030. A month earlier the Graz Declaration was adopted by the EU. This ‘green deal’ for Europe’ represents the commitment to complete the TEN-T rail core network, increase the efficiency and attractiveness of rail transport by removing all the barriers to interoperability, and strengthening the digitalisation and automation in the sector.

The shift to rail was further encouraged by the amendments enabling a wider charging regime for road vehicles, adopted by European Parliament in November. Furthermore, efforts were taken to increase the scope of the Combined Transport Directive, which should encourage multimodality and hence the shift to rail. “In today’s environment the simple defense of rail freight’s market share is an achievement in itself”, commented Schultze.

2018 was the year of the ‘lessons learnt’ from the Rastatt incident. Although the 7-week disruption of railway services between Karlsruhe and Basel took place in 2017, the aftereffect was surely felt this year in a positive manner. The most important lesson learnt -according to Silvia de Rocchi of the European Rail Freight Association (ERFA) – is that the rail freight sector should think more European, instead of focusing on the national level. “In 2018 rail freight took stock of the weakness of the sector and the actions needed to improve it. A new handbook for managing rail traffic in case of unplanned disruptions was adopted, lessons were learnt and positive steps were taken”, she commented.

A major milestone was the adoption of English as the main language of communication between infrastructure managers and railway undertakings during international disruptions. At least one English speaking dispatcher in national traffic control centres will be guaranteed in every shift from 2020. But the rail freight sector also learnt about the need for alternative language requirements, as there are too many drivers that are currently not able to operate a train in another country. “It is necessary to explore alternative options to the current language requirements allowing for greater flexibility but ensuring an equivalent level of safety with the current requirements”, the European Commission concluded, allowing for pilot projects in 2019.

Further progress was made this year, implementing the Sector Statement agreed at the 2016 TEN-T Days in Rotterdam. The ELETA project seems to be on track, providing estimated time of arrival information for twelve selected intermodal train runs with the objective to demonstrate the efficiency gained when sharing train run information. The lack of harmonised timetabling procedures between European countries is being addressed with the ambitious project Re-design of the International Timetabling Process.” These are just two of the ten projects in progress.

The TEN-T network was also developed in terms of infrastructure. Spanish regional governments increasingly took the lead in the completion of the Mediterranean Corridor, connects the Spanish coast to France, Italy, Slovenia, Croatia and Hungary. Another important project, Rail Baltica, was given a timeframe this year. Linking Poland and the Baltic states by rail, the construction should commence in 2020, while the entire project should be delivered by end 2025.

Focus on the east

The European core transport network was for the first time been extended towards Armenia, Azerbaijan, Belarus, Georgia, Moldova and Ukraine, when in November the European Commission presented new maps of the TEN-T network. This is to better connect the continent to Asia, it commented.

The focus on the east also became evident with the stance towards the Chinese Belt and Road initiative. When the European Commission revises the TEN-T network in 2023 it should consider the possibilities that the Belt and Road initiative (BRI) offers, said Alain Baron of the Directorate General for Mobility and Transport (DG MOVE) in June. “For example, what could the development of the Port of Piraeus mean? Maybe we should prioritise a good connection from this port into central Europe”, Baron said.

Last but not least, the rail freight sector took big and many steps towards the innovation of the industry, a task which is considered key in improving the attractiveness of the modality. Several key players launched innovative concepts; from bogies to wheelsets, from brakes to tank containers. SBB Cargo launched operations of its 5L Demonstrator, DB Cargo and VTG ran trials of another innovative freight car and BASF increased its collection of innovative tank containers.

On 19 December, a successful test drive was carried out with a self-driving locomotive on the Betuweroute, the freight dedicated railway line in the Netherlands. In September, French railway operator SNCF announced to introduce prototypes of driverless mainline trains for freight and passengers services by 2023. Innovation Manager Chris Verstegen from ProRail called this the “era of automatic driving.

While high-speed train traffic was previously an innovation mainly reserved for passenger traffic, 2018 saw two rail freight operators launch a high-speed service in Italy. On 7 November, the world’s first high-speed railway service was launched by Mercitalia, connecting Caserta and Bologna. It was followed by another high-speed service by Interporto Servizi Cargo (ISC) between Florence and Bologna.

Even faster than high-speed will be the Hyperloop, an innovation that prior to 2018 only existed on paper. Several initiatives were launched this year, mostly concerning research centres for future technologies. Hyperloop Technologies settled in Toulouse in April, and in August Virgin Hyperloop One signed with Spanish rail infrastructure manager Adif to build a research centre in Malaga. That same month, Transpod announced its plans to set up a centre in the French village of Droux.

With such important steps, the groundwork has been laid for an even more innovative 2019. There is a large variety of concepts on the shelf ready to be explored. Regular operations of long freight trains up to 1,500 metres, the next generation of bogies, paperless rail freight journeys and more driverless train operations can be expected. And this is good, as rail still requires a lot of progress in order to compete with the other modalities.