Virgin to develop a Hyperloop train in Malaga, Spain

Virgin Hyperloop One and the Spanish rail infrastructure manager Adif have agreed to build a research centre in Bobadilla, a village in Malaga. The centre is set up for the development of a hyperloop train for freight and passenger services.

The Virgin subsidiary will invest 430 million Euros in the project, while ADIF adds another 120 million Euros in funding, originating from Spanish and EU loans for the science and R&D sectors. Virgin Hyperloop One will build a manufacturing plant, a laboratory and a warehouse, sharing the centre with Adif, which provides finances the installation.

Spain has several high-technology train centres, but the one in Malaga proved to be the best candidate for the innovative centre. Bobadilla already houses a research park focused on the development of high-speed train in Bobadilla. The Spanish village is situated close to the Dry Port of Antequera. Once completed in 2020, this port will house the biggest multimodal centre in southern Spain in 2020.

In addition, Malaga has a big pool of rail engineering graduates to take part in research projects in the area. Adif estimates the project will generate around 250 highly qualified jobs and attract more rail-freight research projects to Bobadilla and Antequera, strengthening the Dry Port development.

The idea of a hyperloop train was initiated by Elon Musk. He published the first white paper about this revolutionary concept in 2013, and it started to be developed in 2014 through private donations. The target is to build a train that can reach up to 1,200 kilometres per hour, incorporating reduced-pressure tubes.

The concept is based on pressurised capsules that ride on an air cushion driven by linear induction motors and air compressors. The first prototype is being built in California and the first service to launch will be for passengers between Los Angeles and San Francisco. In addition, freight and passenger services will be launched in France and the Netherlands, to link Paris with Amsterdam.

Towards Industry 4.0 in terminals: how do AI and 5G work? 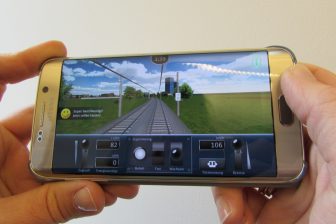