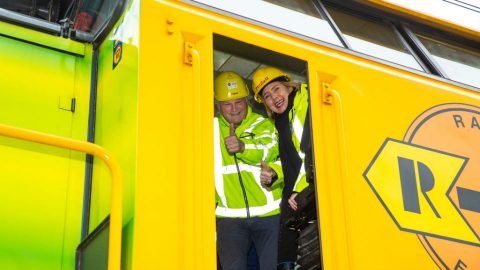 On Wednesday, rail freight operator Rotterdam Rail Feeding, infrastructure manager ProRail and Alstom conducted a successful test drive with a self-driving locomotive on the Betuweroute, the freight dedicated railway line in the Netherlands. According to Innovation Manager Chris Verstegen from ProRail, the experiment was “the start of the era of automatic driving”.

ProRail director Pier Eringa, Minister Cora van Nieuwenhuizen of Infrastructure, a train driver and a test driver were present in the cabin. Van Nieuwenhuizen was asked to press the start button of the self-propelled system, after which the locomotive continued driving independently. During the test, the locomotive mixed with existing train traffic on the Betuweroute, which was a world’s first according to ProRail and Alstom. The test drive could be followed via a lifestream for journalists and those involved.

Prior to the test, an Automatic Train Operation (ATO) system was built into the locomotive. During the trial the Grade of Automation level 2 (GoA2) was applied, where the train takes over certain driving tasks from the driver, but the driver is present in the cab and supervises the journey.

The locomotive completed a trajectory of 100 kilometers in both directions, testing different functionalities of the system. During the experiment the locomotive drove according to a certain timetable, whereby it was checked whether the vehicle stopped punctually and accurately at the right location. During a simulation, the train had to deviate from the timetable and anticipate a new situation.

ProRail director Pier Eringa emphasised that the aim of this test is not to remove the driver from the cabin. The train driver is “maximally supported with the techniques that are already available”. By adding the autopilot, the operator becomes more “a companion for the control of the train”. Therefore, according to him, the human factor is no longer the limiting factor, “but the combination of people and technology ensures that much more is possible on the track”.

Minister Van Nieuwenhuizen added that train drivers should not be afraid to lose their job”. “A driver is still needed, for example, if someone is walking alongside the track or if a tree is falling on the track. The job of a driver will change through digitisation, but the driver will not disappear. ”

According to Eringa, complex regulations sometimes hinder the development of techniques such as ATO. He points out that it is therefore difficult to test new technologies on the track. Van Nieuwenhuizen: “I recently carried out the experimentation law for road traffic. I can imagine that this should also be possible for railways. “The experimentation law for road traffic makes it easier for companies to carry out experiments with self-driving vehicles, among other things. Eringa points out that this has not yet been arranged for railways.

Alwin van Meeteren, director of Alstom Utrecht, explained that automatic driving on the track is already possible. “The ATO technique is not new, but its application is. The test on the Betuweroute is unique in the world.” Alstom is the supplier of the ATO system and has already equipped various metro lines in cities such as Singapore, Hong Kong and Lyon with this technique.

Meanwhile, completely self-driving subways (GoA4) already exist at various locations around the world. However, an important difference between a metro connection and the regular track is that metro lines are often closed and have little to no crossings. That is why the supervision of the driver is important.

“During the trial we do not do things that are unsafe, but we will optimise things within the safety profile,” explains van Meeteren. The Betuweroute is equipped with the European ERTMS safety system, which ensures safe driving.

According to Innovation Manager Chris Verstegen from ProRail, the experiment on the Betuweroute “kicked off the era of automatic driving” on railway. Early next year an experiment will start where, in collaboration with Arriva and supplier Stadler, a trial run will take place between Groningen and Zuidhorn. On this route the ATO technique is combined with Automatic Train Control, New Generation (ATB NG), the national security system.

The fact that the ERTMS programme office will not equip the large stations with ERTMS until after 2030 does not have to be an obstacle to the rollout of ATO before that time, according to Verstegen. Although ERTMS has “fewer loopholes”, ATO can also be applied perfectly to the current ATB security system, he believes. “ProRail will be ready for ATO in a few years’ time. It depends on the operators how quickly we can apply this. ”

In addition to the test between Groningen and Zuidhorn, ProRail is holding talks with NS about carrying out experiments on the main rail network, said Verstegen. When and on which routes these will take place is still unknown.