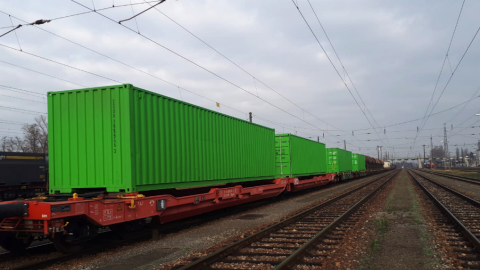 On Friday 14 December, the Rail Freight Forward coalition was launched in Katowice, Poland. This is a coalition of European rail freight companies committed to reducing the negative impact of freight transport on the planet. The key objective is a modal share of 30 per cent for rail by 2030.

By 2030 this share should be almost doubled, the parties believe. According to the European Commission’s 2011 White Paper on Transport, it should be possible to shift more than 30 per cent of road freight over 300 kilometres to other modes, such as rail or waterborne transport, by 2030.

The Rail Freight Forward Coalition signs the Rail Freight Vision 2030 and its manifesto today, thereby emphasising the objective. To mark their climate commitment, the coalition will also launch Noah’s Train, the world’s longest transformative mobile artwork. Designed by prominent European street artists and inspired by the old tale, it symbolises the hope rail freight brings to our common future. The train stops in Vienna on 14 January, in Berlin on 24 January, in Paris on 5 February and in Brussels on 20 February.

Strong cooperation within the sector is key to unlocking rail’s potential and securing its place as the best solution for reducing harmful emissions, decongesting Europe’s roads and providing the efficient and competitive services sought by customers, pointed out ERFA, another coalition member.

The lobby organisation points out that further work needs to be done to ensure much-needed support from infrastructure managers so that rail can compete successfully with other modes of transport for customers.

According to ERFA president Lindsay Durham governments must support infrastructure managers by putting in place incentives to deal with recurring problems on the network, which lead to service delays/ cancellations. “Unless responsibility is attributed for trying to prevent and resolve recurring disturbances to the rail network, such as falling trees on the track, suicides and maintenance-relate problems, rail will be unable to seriously address its quality problem.”

Moreover, she calls for a more standardised infrastructure, e.g a standard gauge to transport standard containers, so that unit costs can be reduced, enabling a more competitive price. “If infrastructure is not fit for purpose, then it is the railway undertakings who suffer the inefficiencies.”

An improved framework is also needed for delivering competition within rail, the organisation claims. “Competition drives innovation, investment, efficiency and new ideas. A large part of the policy framework has already been put in place, but not yet is there an open and competitive market in all countries. We would therefore support evolution of the existing rail packages to ensure that there really is absolute clarity and no hiding place for discrimination.”