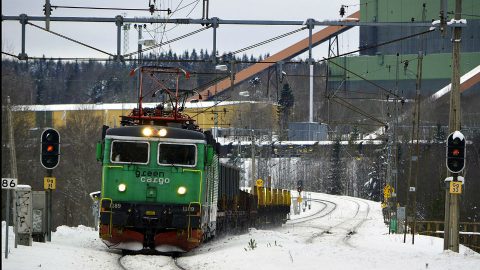 The track access charges for Swedish railway are under review for the first time in history. The marginal costs charged for freight and passenger services are too low, and the charging structure is not compliant with EU legislation, the national regulator Transportstyrelsen has ruled. Infrastructure manager Trafikverket explained its current structure and elaborated on its plans for the future. 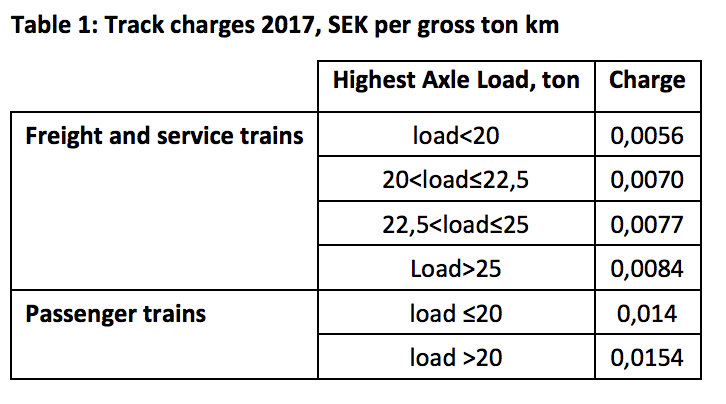 Sweden is somewhat unique in setting a capacity charge for railway: train operators on lines with a capacity of eighty per cent or more pay more to access these paths. In this way, the use of lines with less capacity is encouraged. But this is not the only reason, explains Trafikverket. “We belief that the capacity charge affects the marginal cost as a line with high capacity usage requires higher maintenance costs. For example, maintenance may have to be carried out at night. Thus it is, presumably, costlier to use a highly-used track.”

“However, we have not provided evidence of this correlation so far”, acknowledges Trafikverket. It is here where Transportstyrelsen rightfully points out that the charging system does not comply with EU law, which requires the infrastructure manager to demonstrate such correlation if it wishes to justify framing marginal costs as the costs directly incurred.

“In principle, the capacity charges are probably a good idea. Currently, the Swedish railway system faces major capacity shortages. However, the charges make up a large share of the total revenue, and for trains running on lines with a lot of traffic they are a major part of the total charges paid. Hence, we feel it is necessary to scrutinise them”, said the regulator, a claim not denied by Trafikverket. “We believe there is a fair possibility that we are able to demonstrate the correlation”, it commented.

However, for the infrastructure manager, the discussion about the height of the marginal costs is not concluded with merely justifying the capacity charge component. They must be seen in a historic context, as they have traditionally been set at a relatively low level. “This has been part of a general promotion of transport by rail”, said Trafikverket. “We do have a plan to align the charges with the marginal costs for rail operations, but steadily, in a pace that the industry can cope with.

According to the infrastructure manager, the charges today are already more in balance with the marginal costs as they used to be. “In order to better align the charges with marginal costs we have had to increase the charges, whereas in some other countries in Europe infrastructure managers have faced pressures to do the opposite”, Trafikverket noted. “There are still adjustments to be made before the charges are aligned to the marginal costs the way we think they should be. But we need to see how we place the burden on freight compared to passengers. This last sector has always paid more, following the economic rationale that freight is more price sensitive, and we wanted to avoid a shift to road.”

“Further, Trafikverket does not use mark-ups. Mark-ups may be differentiated according to the ability of each market segment to bear the cost. Hence, using mark-ups would allow Trafikverket to differentiate the track access charges according to their ability to pay, rather than doing so with the marginal cost-based charges.” In response, Trafikverket states that it does carry out regular analyses of the effects of the charging on various market segments. “We figure that these meet current requirements. The regulator can issue more detailed provisions on the issue but they have not done this.”

In addition to the charging structure, the regulator has also pointed out that current cost estimates for setting the marginal costs are out of date. “The current values show that the marginal cost of an additional train on the track is 0.02 Swedish Krona (0.0019 Euros) per GTK. However, this estimate is out of date. Recent research points to the values being closer to 0.04-0.05 Swedish Krona (0.0039-0.0048 Euros) per GTK, i.e. more than twice as high as the current recommended value”, commented Transportstyrelsen.

“To meet the requirements from our regulator´s ruling, but at the same time abide by our own development plan, we need new knowledge, inter alia on cost assessments and the impact of capacity constraints on marginal costs. We acknowledge that the current assessments are old and to some extent insufficient to meet our needs. We have initiated research to gain new knowledge, but we do not want to make hasty jumps based solely on the latest findings. These findings should preferably be reviewed and more widely accepted before we use them”, said Trafikverket.

“We do have a long-term plan, but we do not consider it to be an obligation”, the infrastructure manager continues. ” We are aware that the market requires certainty, but we cannot always provide this, we cannot know for certain how we do things several years ahead. Track access charges are related to a number of developments and systems. This being said, our long-term plan is aligned with the national transport plan. We have a revenue calculation up till 2029, but we are keen not to provide more detailed information on the charging structure than we can ascertain.”

The infrastructure manager has appealed parts of the ruling at the administrative court. In December it will come back with a detailed response to the ruling. It is the first time Transportstyrelsen has issued a ruling, but it always monitors the charges indirectly. “Railway undertakings and other market actors may raise complaints to us, e.g. concerning TACs. However, we have only received one complaint against Trafikverket’s charges, and this was raised after our review was initiated. This has lead us to believe that, from the market actors’ perspective, the scheme has been acceptable”, the regulator concluded.