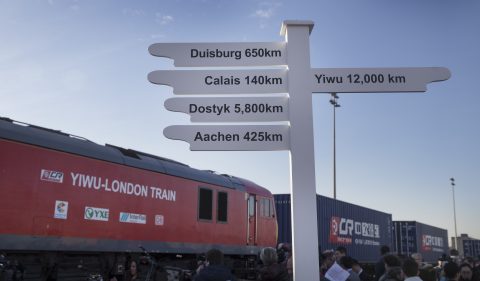 New Silk Road could surge to million TEU in 2025, but with subsidies

Published on 04-06-2019 at 11:28
© Licensed to London News Pictures. 18/01/2017. London, UK. A sign noting the route of first direct rail freight train from China is seen as it arrives at Barking Rail Freight Terminal east of London. The new service set off from China on the 3rd of January this year. London is now the 15th European city to join what the Chinese government calls the New Silk Route. Photo credit: Peter Macdiarmid/LNP

Ideally, the Eurasian rail cargo volume could increase to a million TEU in 2025. However, this forecast highly depends on the continuation of the Chinese subsidies. If this financial support for rail freight traffic on the New Silk Road is discontinued, the volumes could be 25-30 per cent lower in six years from now.

This prediction was uttered by Andreas Schwilling from research institute Roland Berger at the RailFreight Summit in Gdansk. Ideally, the Eurasian rail cargo volume could increase to 800,000 – 1,000,000 TEU in 2025. Without subsidies, the forecasted volumes are 550,000-750,000 TEU, he said, noting that there was no clarity about the continuation of the Chinese subsidies at the moment.

Only the larger players

The general belief is that without subsidies, rail freight traffic on the New Silk Road will continue to move, although with fewer players on the market. “The smaller companies with irregular shipments will disappear. At the moment, these companies are fighting for Chinese support. Without subsidies, the market will be more realistic and demand-driven”, said Uwe Leuschner from Db Cargo Eurasia during a panel discussion at the summit.

According to Leonardo Vender from Rail Cargo Group, this would basically mean coming back to the situation of 5-6 years ago. “If no subsidy means a cost increase of 30, 40 or more per cent, than for sure the volumes will decrease dramatically. Only big industry players who really need short transit-times will continue with regular volumes on the New Silk Road, for example company trains.”

Vender pointed out that his company started operating on the New Silk Road in 2007, when there were no subsidies for the train to Europe. “The first train from Dalian (China) to Kapfenberg (Austria) was was pioneer work, but a success. This only shows that this is possible, even if nobody believes it.”

Looking back at the says before the Belt and Road Initiative also shows how much has changed in this last ten years, he added. “At that time, it was a challenge to connect many different railways and players. There was no large intermodal transit business, so no basic existing connections from east to west or back. Operational-wise, every day a challenge and nothing was working automatically. It was a big challenge to convince customers. In this sense, there is much more awareness and a positive mindset for railing today.”

In 2018, the volumes of rail freight traffic on the New Silk Road accumulated to 370,000 TEU, according to Schwilling. In 2017 this figure was 274,000, a year earlier it was 142,000. The majority of the traffic runs via Kazakhstan, entering or exiting Europe via the border crossing Brest-Malaszewicze between Belarus and Poland. “Around 95 per cent of rail cargo transport between Asia and Europe runs through Brest-Małaszewicze”, said Schwilling.

Schwilling also showed that currently, there are eleven potential interconnection points with intermodal terminals between Asia and Europe. “Brest–Małaszewicze offers the shortest distance to main industrial destinations in Europe except for Austria and Southern Europe. For these markets, the route via Ukraine and Slovakia is more attractive”, he said. Counting the kilometres from Dostyk, this route is 4.05 per cent shorter going to Vienna, and even 4.79 per cent shorter to Rome, compared to the traditional Belarus-Poland route.