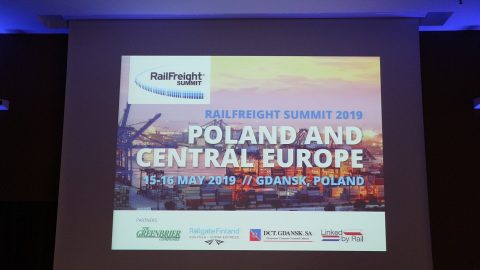 Wednesday 15 May is the first day of the RailFreight Summit 2019, which takes place in Gdansk, Poland. This liveblog provides broadcasting of presentations and panel discussions at the conference. Today’s main topic is rail freight logistics on the New Silk Road.

17.35: The first day of the RailFreight Summit 2019 is over. Networking drinks and dinner are scheduled for today’s evening. The second day of the summit will be dedicated to intermodal hubs in Poland and Central Eastern Europe as well as the emerging markets in the region. See you tomorrow!

“Some look at the New Silk Road as one corridor, organised by one party. This is not correct. At the moment, there are at least four circles. The first circle is inside China, the second circle is in the CIS countries, another circle we have in Poland. The additional circle is developing more and more. It includes multimodal solutions, for example via Kaliningrad. We have to handle the balance inside the circles,” Leuschner explains his vision of New Silk Road.

The really critical question is the Chinese subsidies. Beijing has already stopped financing the empty containers running eastbound. Jaguljnjak considers that it will result in market consolidation. “In the end, the market will be cleaned off the small companies,” the Transcontainer manager notes. In order to avoid this, the companies, small and big, should find new logistics solutions. Thus, Vender stresses that Rail Cargo Group has launched new direct services from China to Hungary, Slovakia instead of the more popular and long routes via Duisburg in Germany. The other example of such a solution is a multimodal corridor via Kaliningrad. 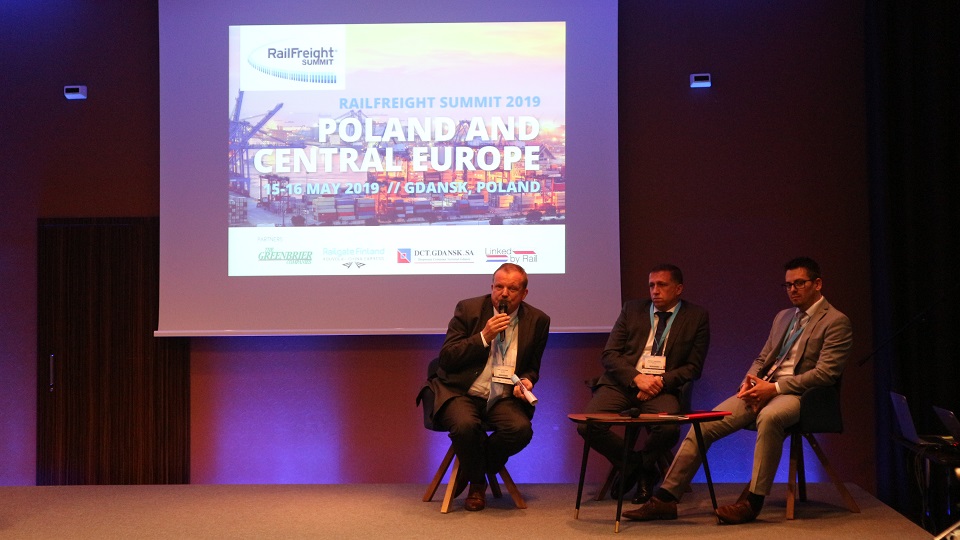 16.40: Questions & Answers to Aleksandra Turunen, Lukas Mani and Erik Evtimov. Aleksandra Turunen from Kouvola Innovation specifies that a new container terminal is planning to construct in the Finnish city of Kouvola. According to her, it is most likely to be automated.

Lukas Mani from Stadler Rail notes that longish freight trains can be also a good solution for increasing the capacity on New Silk Road. At the same time, Erik Evtimov stresses that new intermodal terminals in Europe should be located close to inland waterways. That will provide new opportunities for all the parties.

16.20: Erik Evtimov, Deputy Secretary-General of International Rail Transport Committee (CIT) reports on the common CIM/SMGS consignment note. It is widely used on the Eurasian land bridge. The electronic consignment note is scheduled to enter into service on 1 July. “We have to move to digitalisation,” Erik Evtimov concludes. The electronic documents will also provide more security on the 11-thousand-kilometre railway route between China and the EU, he adds. 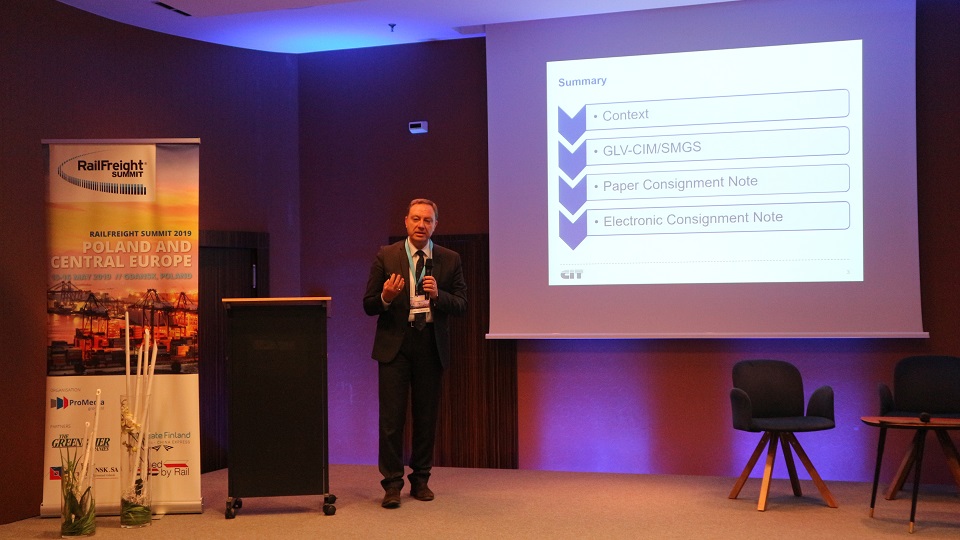 16.05: Lukas Mani, Bid-Manager Sales at Stadler Rail, gives a presentation on the possible conversion of the New Silk Road into a double-stack corridor on the broad-gauge section between Dostyk and Brest. You can read more here about this research. 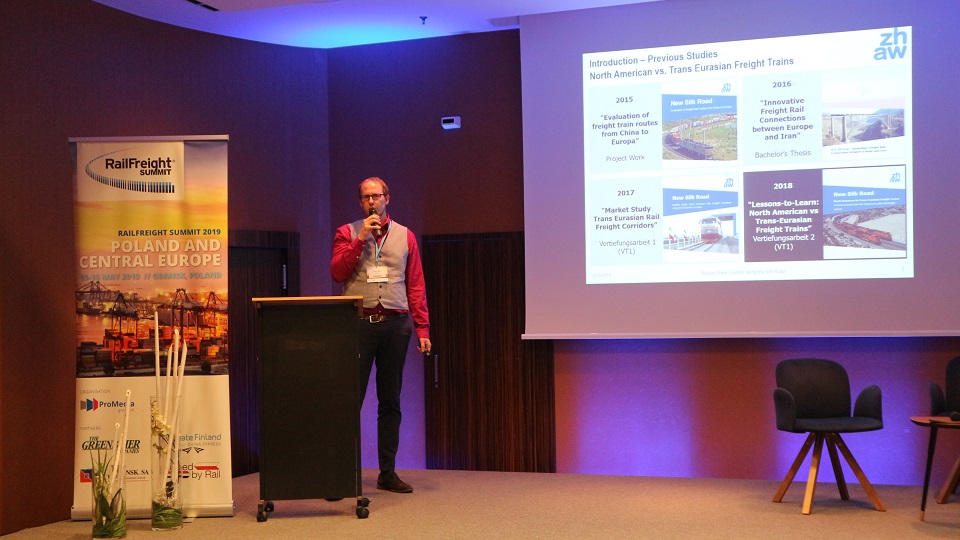 15.40: The second part of the first session starts with a presentation of Aleksandra Turunen, Account Manager at Kouvola Innovation (Finland). She tells about the Nordic Silk Road. Her organisation launched a container train between Kouvola and Xi’an. It delivers freight from China to Finland in 12-14 days. The connection has four main advantages: 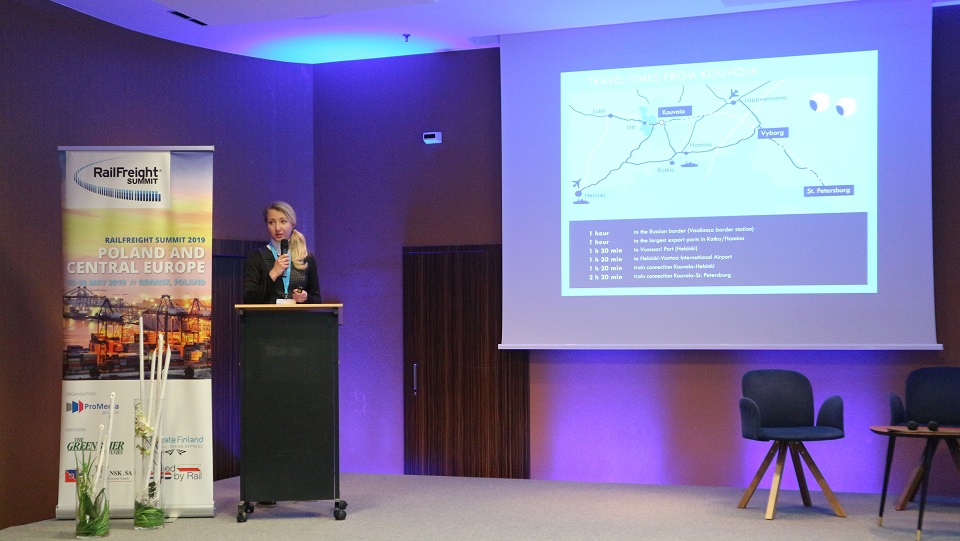 15.10: Short break for coffee and networking.

14.40: The panel discussion devoted to the bottlenecks on the EU border starts. Three speakers participate in it: Halina Bajczuk from PKP Cargo, Marcel Stein from DBO Bahnoperator and Krzysztof Szarkowski from DHL. They discuss several aspects of the problem: infrastructure capacity, custom processing, lack of train drivers, etc. 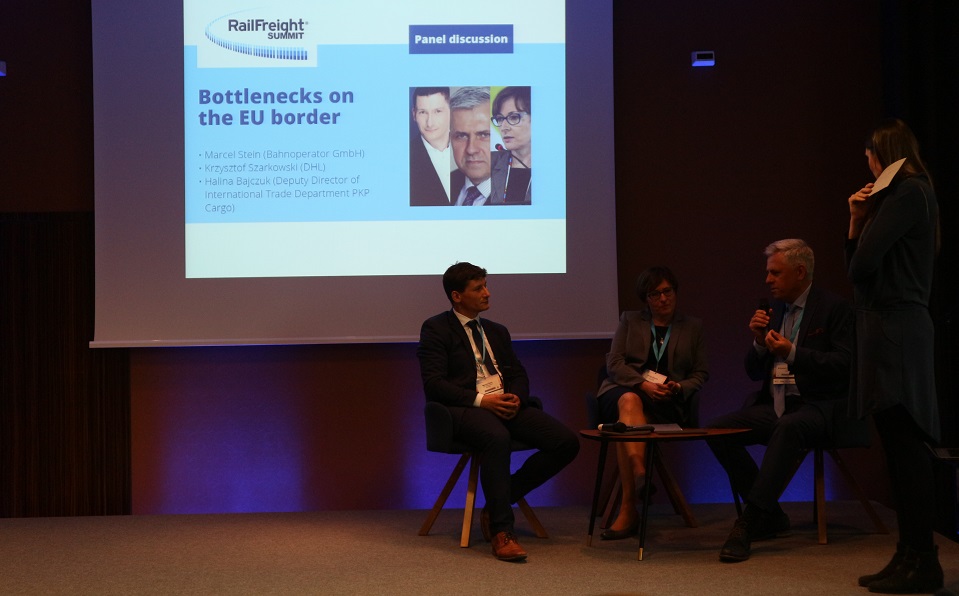 14.20: Halina Bajczuk, Deputy Director of the Commercial Bureau for Foreign and Intermodal Markets at PKP Cargo, reports on the impact of the New Silk Road on Poland. She expects that the number of operational capacity is to increase by four by 2026. 500 million Euros will be invested in the Małaszewicze loading facility until 2026. The money will be deployed by rail infrastructure manager PKP PLK and PKP Cargo.

Halina Bajczuk also describes the rail infrastructure at the Brest/Małaszewicze border crossing. Its main obstacle is a bridge across the Bug river with one track. She notes that although the container reloading on the Małaszewicze terminals takes only four-five hours, the documents require much more time. Therefore, the entire process takes around 24 hours. 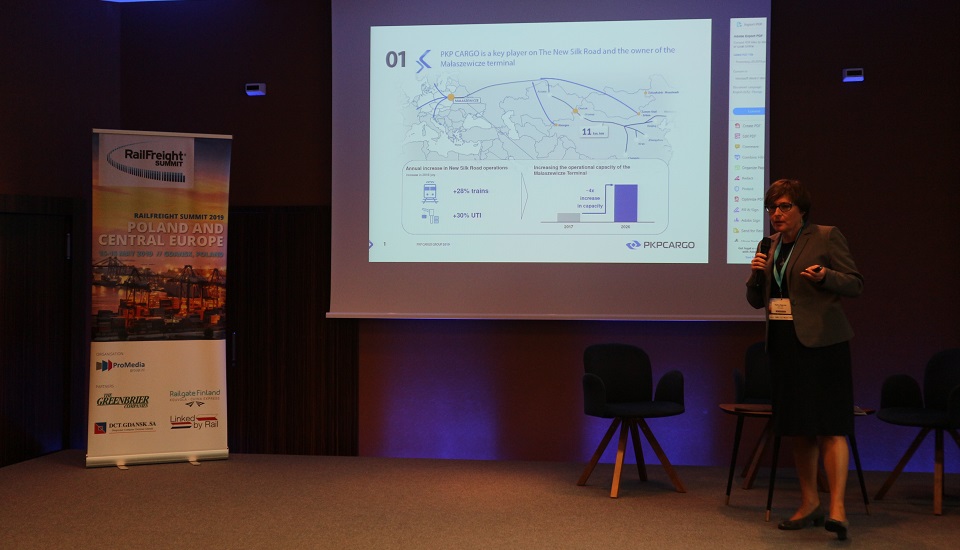 14.00: Katarzyna Szyszko, Policy Officer at Directorate General for Mobility and Transport (DG MOVE) of the European Commission, gives an insight into the EU policy for a better connection with China. The EU-China Connectivity Platform was established to improve synergies between China’s Belt and Road initiative and the EU’s TEN-T policy.

According to Szyszko, another important step in this regard was taken in September 2018 by adopting the EU Strategy for Connecting Europe and Asia. Its main goal is to provide a better connection between Europe and Asia in terms of transport links, energy and digital networks, people-to-people connections and a comprehensive sustainable financial framework. The latest advantage concluded in April 2019 is an agreement between China and the EU to provide a joint study on railway corridors within the Connectivity Platform. 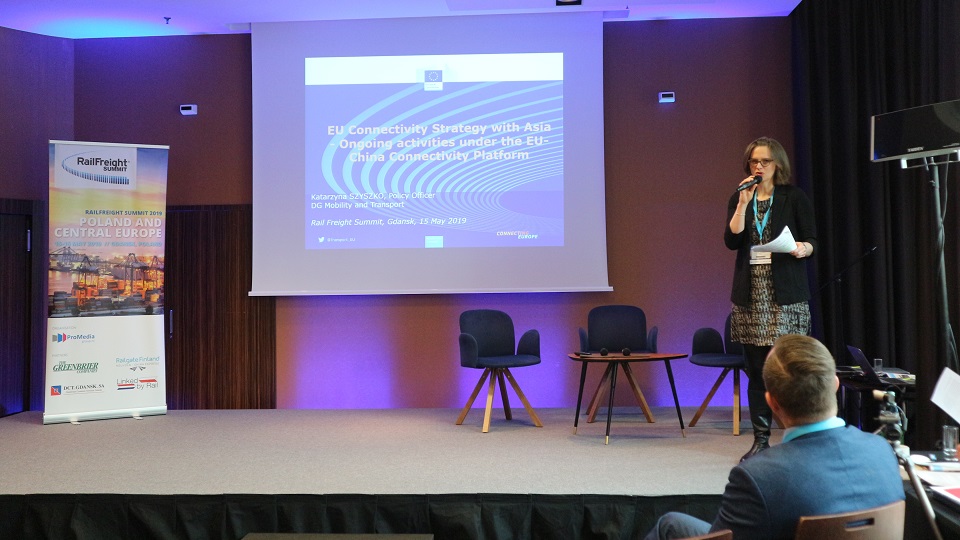 13.40: Short questions to Andreas Schwilling and Marcin Osowski. Schwilling notices that the Eurasian railway bridge via Kazakhstan, Russia, Belarus and Poland still remains the main route of the New Silk Road. There is an alternative like the Trans-Caspian Corridor. “Of course, we keep the South Corridor in mind. But it is not really established yet,” he notes. According to him, the main cause is the need to use different modes of transport in order to carry containers via the Caspian Sea. It creates additional obstacles for route development.

Marcin Osowski says that Kaliningrad port is not a competitor to Gdansk due to several reasons. The trains running to/from Kaliningrad need to cross the Lithuanian border twice. Also, the Russian port has some restrictions in terms of navigation and depth. The real competitor to Gdansk is the port of Klaipeda. It is a gateway for Belarusian export.

13.20: Andreas Schwilling, Partner at Roland Berger’s Transportation Competence Center, talks about Poland’s position in Eurasian rail freight transport. “Poland is ideally located for transporting freight between Asia and Europe,” he says. The main route of the New Silk Road goes via this country, through the Brest/Małaszewicze border crossing. This point provides more than 95 per cent of the container traffic between China and the EU.

The Brest/Małaszewicze border crossing is overloaded now, therefore shippers are faced with delays. Schwilling notes that there are eleven potential interconnections with intermodal terminals for routes between Asia and Europe. Among them are the routes via the Bruzgi and Svisloch crossings on the Polish-Belarusian border, broad gauge to Katowice and so on. 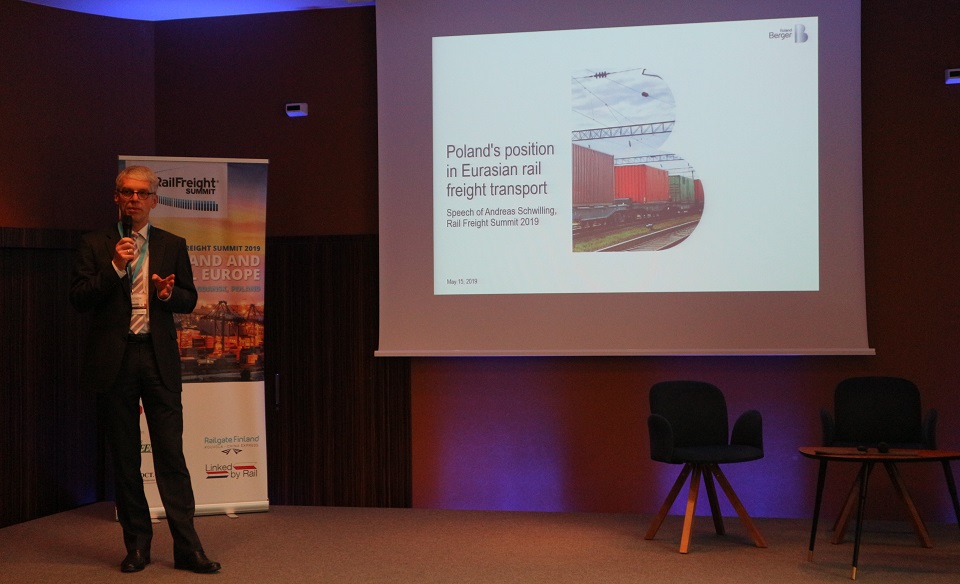 13.10: Marcin Osowski, Vice-President for Infrastructure at Gdansk Port Authority, gives a presentation on the development of railway infrastructure in the largest Polish seaport. Currently, the port has three major freight railway stations: Northern Port, Cashubian Canal and Zaspa. “We plan to build a brand new railway station to the new deepwater parts of the port,” he notes.

According to Osowski, the port of Gdansk has a good opportunity for the future increase in terms of cargo volumes. The GDP of the port hinterland countries will grow by 48 per cent by 2030. Marcin Osowski also mentions Poland’s National Railway Programme until 2023, valued at 15.5 billion Euros. It is a huge modernisation programme that will improve the rail freight connections of the Gdansk port. 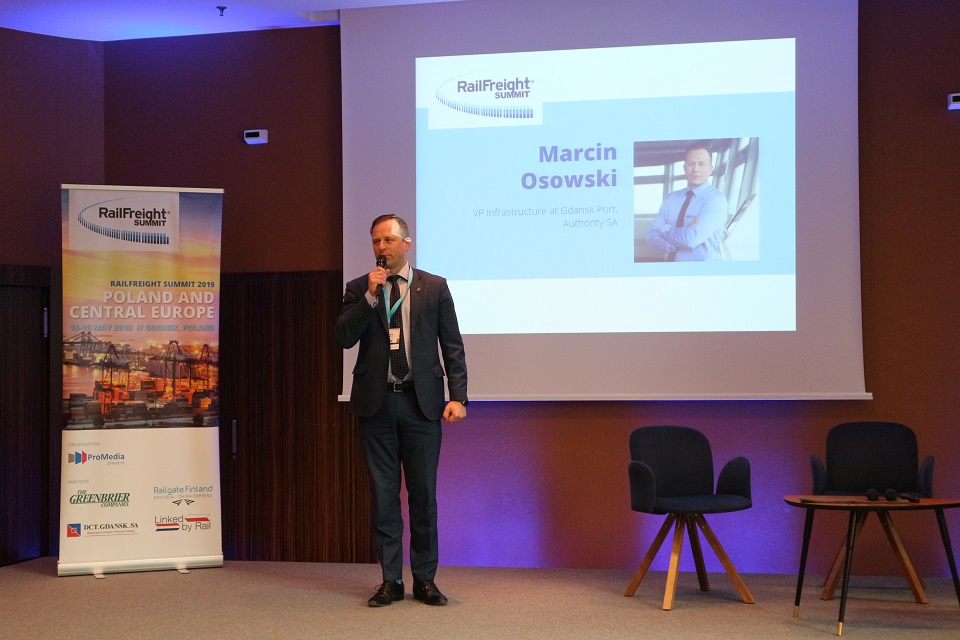 13.00: The RailFreight Summit 2019 is officially kicked off. The second edition of the conference is taking place in Gdansk. Majorie van Leijen, moderator of the summit and editor of RailFreight.com, opens the event. She welcomes guests from more than 10 countries including the Netherlands, Poland, China, Austria, Belgium, Finland and others. 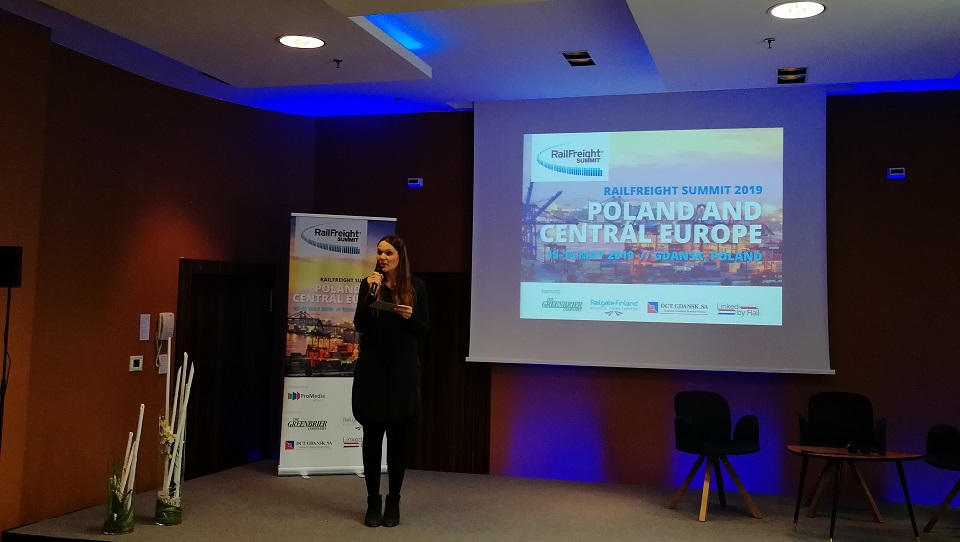 10.00: The first day of the RailFreight Summit 2019 starts with a technical visit to the Deepwater Container Terminal Gdansk. It is the largest and fast-growing container facility on the Baltic Sea. In 2018 the terminal handled 1.9 million TEUs, having set growth of 20 per cent. This year DCT Gdansk plans to proceed more than 2 million TEUs. 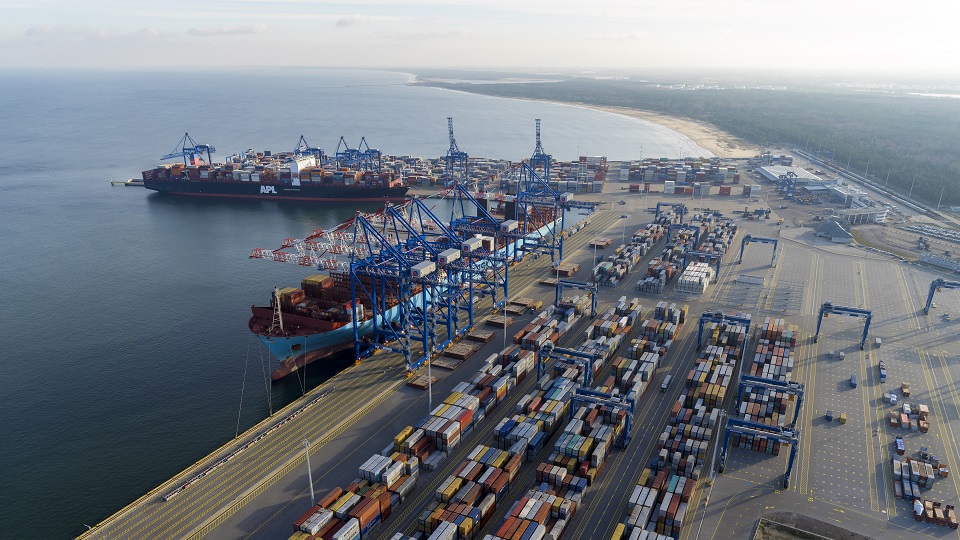 Read more about the RailFreight Summit 2018: