Today is the second day of the Silk Road Summit, Gateway Poland, held in Wroclaw Poland. This is the live blog, broadcasting speakers and reporting the latest news. People who are not able to attend, can follow the summit here.

14.30: Rico Schavemakers takes the stage. As the owner of Schavemaker Logistics, he will talk about the development of the logistic network in Europe, why to chose Poland and the role of the labour market on modal shift.

14.10 Maciej Mastalerski takes the stage. Mastalerski is Managing Director of InterRail Poland. He will give tangible examples of how the East-West rail supply chain operates, and how it is affecting China and Poland in particular.

He continues: “Liberalisation has led to many different parties acting at the border, which makes management complicated. Factors that are looked at are correct invoices for goods, valid shipping documents, other accompanying and correct documents like: phyto-sanitary and veterinary certificates, certificates of analysis, certificates of origin, declaration of conformity, test reports etc. Documents are pre-checked in Malaszewicze on the basis of e-mail copies – most of the irregularities can be corrected before the train arrives.”

Peter Plewa, Member of the Executive Board at Duisport, explains how lead time and costs can be improved.

13.50 Peter Plewa takes the stage. Plewa is a member of the Executive Board of Duisport. He discusses the special possibilities for Duisburg on the Silk Road. Read an interview with Peter Plewa here.

Transit processes can be improved  by making shunting completely neutral, rather than a competitive transaction, he suggests.

“Management of the operation is key in having fast transit times. Duisport can operate three trains in two hours. That is not the case in Malaszewicze.” 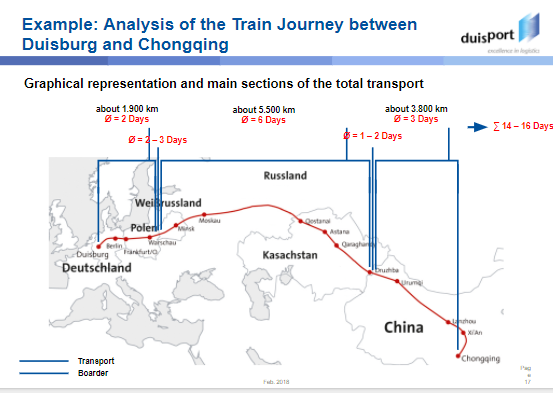 13.15: Klara Paardenkooper takes the stage. Paardenkooper is senior lecturer at the Rotterdam Business School and will talk about blockchain technology in rail freight. Read an interview with Paardenkooper here.

“Why is blockchain called blockchain? Because information inserted cannot be changed unauthorised, it is then a block. It is therefore 99 per cent trustworthy”, she explains.

“Blockchain will cut out the middleman in a transaction. The middleman is there because there is need for a trustworthy party. Blockchain can take up that role. However, the problem is that a blockchain contract is not a legal contract. It does not have a location where certain laws apply. That makes it complicated, because it means that if blockchain is applied, we do not need national institutions.”

She explains how bock chain can be applied rail freight. “You define the parties involved. Then you define the purpose of the transaction. Next, you consider whether you are willing to share your data with the other parties. You may not want to share all data with all parties at all times. If you have looked into these aspects, you approach an IT specialist and he sets up your blockchain.”

“Problems arise in transportation because technology changes very fast, but institutions change very slowly. Blockchain has a major potential for the New Silk Road. It could help make logistics more efficient and transparent and inrease the trust between the parties.”

11.55 Krzysztof Szarkowski takes the stage. Szarkowski is Intermodal/Rail Manager at DHL Freight and will talk about DHL’s development since the start of the New Silk Road/OneRoad&Belt Initiative.

“The European network does not cope well with wind, with low temperatures,or  with high temperatures; there are many problems on the network while in CIS countries capacities are rapidly increasing”, he points out.

“The issues at the Malaszewicze/Brest border crossing are not about infrastructure, but about management”, he says. Dutch infrastructure manager Prorail agrees, saying that the same issue arises at the Dutch-German border, where governments have not agreed on the same standards.

11.35: Witold Smidowski takes the stage. Smidowski is International Business Development Director at Greenbrier Europe and will discuss the focus of his company on growth on the Silk Road.

“EU-China rail transports have increased hundredfold since the beginning of the 2010’s. Since 2011 6,637 freight trains were launched in both directions, including 3,673 in the record-breaking year of 2017 alone. In 2017 about 200,000 TEU were shipped by train from China to Europe, while maritime container flow reached 10 milion TEU”, he says, adding some statistics.
“Around 65-67 per cent of deliveries by train from China to Europe involve goods of a relatively high value: electronic devices, electrical machines, pharmaceutical and chemical products. The city of Łodź, a ‘hub’, as it services around 25 per cent of trains travelling from China to the EU and vice versa, accounts for around 7 per cent of the value of transported goods”, he reveals. “Slovakia and Hungary are competing for the status of a Central European ‘hub’. However, their role is currently limited due to the difficulties affecting transit via Ukraine.”
Greenbrier produces double-stack cars. As these cars can carry twice the load than normal trains, they are the most suitable type of railcar on the Silk Road, he concludes, explaining the possibilities the New SIlk Road offers his company.

10.45: Felix Schwarz takes the stage. Schwarz works as an expert Telematic Solutions at Savvy Telematics. In this presentation you will hear what is possible in tracking, tracing and observing cargo. An interview with Schwarz can be read here.

He explains what could happen on the road. “Delays, siding, shocks, vibrations, temperature rise (reefer), pressure rise (tank container) – dangerous goods, theft, or derailment. For an end client a stable supply chain is very important. If there is a disturbance in the supply chain, the end customer wants to know this, and not from the media.”

A question from the audience: “Are there currently any dangerous goods transported on the New Silk Road?”

Schwarz answers that this is not yet the case. “I hope that dangerous goods will soon be transported on the Silk Road. We have the solutions to meet the requirements.”

He also exlpains that the tracking system sleeps throughout most of the journey to save energy, but can wake up at certain destinations. “If there is a delay, it sends this  information automatically. In that way, the battery survives for six years.”

10.05: Chris Wensink takes the stage. Wensink works as an asvisor transport & logistics at Panteia, and he will talk about he effect on transport patterns to and from European sea ports and what should shape the way in which Europe reacts.

“The vast bulk of freight is transported via the Belarus-Russia-Kazakhstan route, with approximately 220.000 TEU (westbound) in 2017″he says. “We do not know when and if the Chinese subidies will be stopped, but the assumption is that they remain in place until volumes are steady. Subsidies vary per region, but in some places amounts to 100,000 US Dollars (814,000 Euros) per train. The costs of running a train to Europe runs into several hundreds of thousands.”
“When impediments on reefer containers are lifted, volumes may be increased”, he points out. “This remains a major challenge. Another challenge is the border crossing at Malaszewicze/Brest, which faces its current maximum capacity. An ideal time at the border is 18 hours, but this is in practice two or three days longer in westbound direction.” 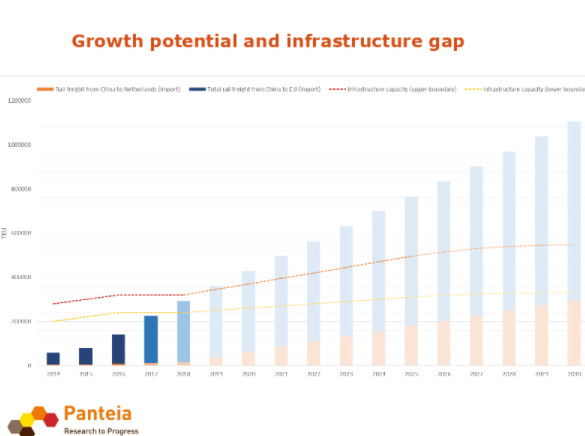 9.50: Roman Jarosiewicz takes the stage. Jarosiewicz works at Boekestijn Transport Service and will talk about Linked by Rail Project – Connecting Poland to Western-Europe.

According to him, tere is great synergy between Poland and the rest of Europe, as companies are sharing the same market, and the same customers.”

He then touches upon the issues currently facing the European connection on the New SIlk Road. “We are open to solving any upcoming issues together with Europe, because as one issue is solved, new ones will come up”, he says. Namining examples of such issues, he points to the infrastructure in Poland, as in many trajects construction is still in progress. “But also low diesel prices are a challenge, as they make it difficult for rail to compete with he road.”

9.40: Dutch Ambassador Ron J.P.M. van Dartel opens the second day of the summit. The theme of his presentation is ‘benefiting from European partnership’.

“China is Europe’s most important trading partner when it comes to import and the second most important export partner. There are many opportunities for developing the infrastructure”, he says.

“It is not a coincidence that the summit takes place in Poland. Poland has the largest terminal market and is the main EU trading partner for China. Poland has the potential to become an important transshipment country. However, there is work to be done. Investments are crucial for a broader EU network. Time is an important factor. Goods are waiting too long for transport opportunities.”

The team behind InvoiceMate is a great blend of seasoned professionals and new talent. The team consists of some of the best blockchain and Blockchain Invoicing
professionals with global exposure and a clear vision. We have zealous software engineers with an urge to learn and employ the latest technologies.