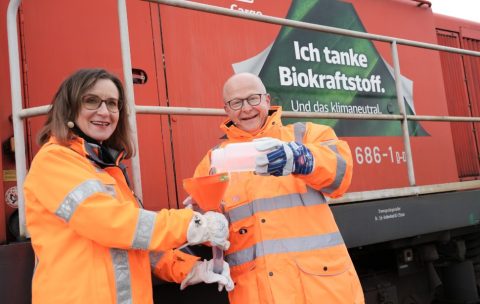 DB Cargo wants to convert existing fleet and use biofuels

The HVO fuel or vegetable oil fuel seems to be the future for DB Cargo’s last-mile operations. The company aims to convert its existing diesel locomotive fleet and make it fully compatible with biofuels. Biofuels are an essential step for the rail freight industry to reach carbon-neutrality.

“The HVO fuel, as an alternative to diesel, can make heavy shunting and diesel locomotives climate-neutral. We are investing in new technologies and will convert the diesel locomotives to hybrid technology. They will still be operated without any reduction in performance, as extensive test series have now shown”, said DB Cargo’s head, Sigrid Nikutta.

Hydrotreated vegetable oil (HVO) is made from biological residues and waste. No additional cultivation areas are used for the production, which compete with the food and feed products. The biofuel is also free from palm oil. Combustion in the engine only releases the amount of CO2 previously withdrawn from the atmosphere during the growth of the plants.

Nikutta also vividly illustrated what it means for her company to use biofuels. “We have managed to square the circle – we can easily run freight trains with alternative fuels and the existing locomotive fleet in a completely CO2-neutral manner”, she commented, underlying the importance of such a project’s implementation. She also pointed out that such an approach is not a solemn decision of the company. The customers push towards a sustainable direction, and the company complies.

What is important, though, in the case of DB using biofuels is that there is no need for investments in new locomotives. The German company can convert its existing fleet at a relatively low cost, and the German government supports this fully. “The fact that we can make the existing fleet CO2-free with this new biofuel is another important step towards a climate-neutral rail. It is an important energy policy signal, especially in these times when we urgently need to reduce our dependence on fossil fuels.”

DB Cargo UK has paved the way for the sustainable biofuel transition of its mother company. Since late 2020, DB Cargo’s British branch has launched several tests with locomotives running on HVO fuel. The tests were also undertaken in fully commercial services, such as between Tata Steel’s South Wales plant at Margam, Port Talbot, to Round Oak in Brierley Hill in the West Midlands, near Birmingham. With the support that the biofuel projects see from the British and German governments, it seems that HVO powered locomotives are the future for DB.