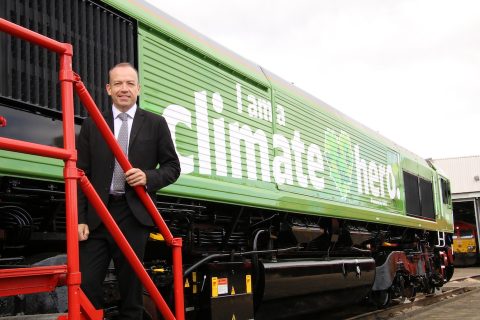 UK rail minister Chris Heaton-Harris has made a fact-finding visit to DB Cargo UK’s Toton Depot in the English Midlands. The government official was on location to see for himself the progress made with hydro-treated vegetable oil fuel as a commercially viable and environmentally friendly alternative to diesel fuel in the rail freight locomotive fleet.

The designated rail minister within the UK government, Chris Heaton-Harris, has been meeting with the rail freight industry representatives at DB Cargo UK’s Toton Depot. In addition to ceremonial duties, including unveiling a newly designated and liveried locomotive, the minister was learning more about the company’s innovations and experiences with hydro-treated vegetable oil fuel. DB has been at the forefront of trails of the sustainable fuel as an alternative way to fuel its diesel motive power.

Chris Heaton-Harris, who in his constituency role represents Daventry and has first-hand experience of rail-freight operations, has been keenly interested in the environmental aspects of phasing out fossil fuel in favour of sustainable alternatives. The prospect of using fuels like hydro-treated vegetable oil (HVO) makes commercial sense. For a company like DB Cargo UK, who operate over 200 diesel units in their fleet, HVO gives it a much more realistic chance of meeting government-mandated emissions targets.

Speaking earlier to RailFreight.com, Heaton-Harris noted the progress that DB Cargo has made in a relatively short time. “From the first hydrogen-powered train on the network earlier this year to a locomotive fuelled entirely with treated vegetable oil, this really has been a landmark year for green and clean innovation on our railways”, he said. “Rail freight offers significant benefits to the environment, taking lorries off the road while keeping our economy moving. Harnessing sustainable sources of energy like this will help us to achieve our vision for a net-zero carbon transport system by 2050.”

I Am A Climate Hero

As well as reviewing the operational logistics of operating with HVO, Heaton-Harris performed the official unveiling of the newly-named ‘I Am A Climate Hero’ locomotive during his visit to Toton. “We are boosting British business whilst cutting carbon. This is what building back greener is all about”, he said, paraphrasing prime minister Boris Johnson pledge to ‘build back better’ in the wake of the pandemic. “Trains are one of the most eco-friendly ways to transport goods”, added the minister. “DB Cargo UK is leading the way in making it even greener.”

The newly-liveried class 66 goes straight back into revenue-earning and promotional service today.