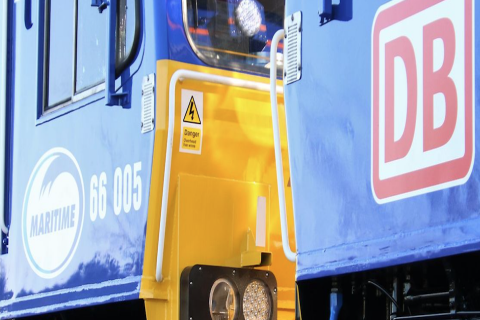 Hot on the buffers of their last foray into sustainable fuels, DB Cargo UK has announced another new trial. This time the Doncaster-based operator has teamed up with Maritime Intermodal and conducted evaluation trials of HVO fuel in two examples of their industry workhorse class 66 conventional diesel locomotives. The announcement comes as DB Cargo UK teamed up with Tarmac earlier this week to commit to HVO fuelled services full-time.

DB Cargo UK and Maritime Intermodal have announced they conducted trials of one hundred per cent renewable Hydro-Treated Vegetable Oil (HVO) on their rail freight services from the Port of Felixstowe to the East Midlands Gateway freight terminal. A series of nineteen trains on the route have been hauled by HVO-fuelled locomotives. The trials were all scheduled to take place during May. The initiative represents the first time one of DB Cargo UK’s intermodal customers has participated in the carbon reducing fuel trials.

Maritime is the first of DB Cargo UK’s intermodal customers to trial the use of the environmentally-friendly fuel on its services. Throughout May, two Class 66 locomotives (designated 66085 and 66077) hauled a total of 19 services between Felixstowe and the Maritime facility in the East Midlands.

, Managing Director (Intermodal and Terminals) at Maritime, said this reinforces both companies commitments to greener and more sustainable rail freight solutions. “The environment remains at the top of our transport agenda, and we are confident the HVO fuel will ultimately play a critical role in reducing carbon emissions across our operations. We look forward to seeing the results which if successful, will allow us to extend more of our services with the support of our customers.”

HVO – Hydro-treated Vegetable Oil – is marketed as ‘one of the world’s purest and greenest fuels.’
It’s synthetically made through the hydro-treatment process from vegetable oils or animal fats which significantly reduces harmful carbon dioxide (CO2) and nitrogen oxide (NOx) emissions when used in diesel vehicles and machinery. Supplied by Crown Oil, the HVO is responsibly sourced. It is fully derived from waste products and no virgin products are used in its manufacture.

The Government has set the rail industry a stretching target to achieve net zero carbon emissions by 2050. DB Cargo UK’s Head of Sales Roger Neary said the company was working with a number of customers to prove HVO fuel as a viable alternative to the use of traditional red diesel in its locomotive fleet. “We are delighted that Maritime has agreed to be the first intermodal customer to work with us on this exciting project that could ultimately lead to a significant reduction in our carbon footprint and that of our customers.”

DB Cargo UK currently operates 228 diesel and electric locomotives that transport in the region of 37 million tonnes of freight each year across the UK and into Europe. It uses approximately 45 million litres of red diesel a year. Earlier this month they entered into operations with Tarmac to haul bulk cargos behind HVO fuelled locomotives.