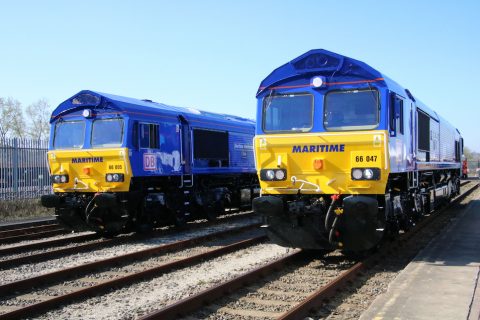 Rapidly developing freight operator Maritime is making a main line express out of its five-days a week flow between the busy east of England port at Felixstowe and East Midlands Gateway, very much the inland destination for everything except ships.

On the edge of a motorway, and an airport, and most importantly rail connected, it is no wonder that East Midlands Gateway, a fast growing inland port in central England is going from strength to strength. That is why Maritime, the trains to truck-stops operator, has signed a twenty-five year lease to operate the rail served functions at the Castle Donington site.

Round the clock round trip

Since the beginning of January, Maritime has made the route the company’s eighth regular flow. “The new service commenced on 7 January”, says Ben McQuilliam, who handles marketing and communications out of head quarters at Felixstowe. He says it is a round the clock operation. “There are flows departing from the Port of Felixstowe at 8am and arriving at East Midlands Gateway at 17.20pm, then departing EMG at 20.50pm and arriving back at the Port of Felixstowe at 2am, five days a week from Tuesday to Saturday”.

Maritime is less than twenty years old, and has been active in rail and warehouser logistics for less than ten years. As expected with the company, they are not ones for shunting into the slow line. They were due to begin operations at East Midlands Gateway in early 2020. They achieved that within the first week of the year.

North of the Border next

While Felixstowe is the only flow that Maritime currently operates into East Midlands, the company already has expansion plans. They have announced plans for further services from Southampton and London Gateway. The latter may encourage Network Rail to hurry up with reinstating the Barking – Gospel Oak route, badly damaged by a derailment last week. On the horizon are further flows from the new terminal, to Hull and Mossend, near Glasgow – which would be the company’s first rail venture into Scotland.

Ten years ago, the biggest plant operated by Maritime was a curtain sided artic (articulated lorry). Now there is a liveried fleet of class 66 workhorse diesels on duty around the UK. “There are now seven Class 66 locomotives owned and maintained by DB Cargo UK”, says McQuilliam. “Also GB Railfreight have Maritime One”.

Not standing still while commenting on the new route from Felixstowe, John Bailey, managing director of intermodal and terminals at Maritime, said this was just the start. “We are delighted to be extending our rail offering, our first of many at EMG which is set to open a new intermodal market for the industry, increasing productivity and removing truck miles from the Midlands’ major routes.

“The growth we have seen in the rail sector already is a testament to our commitment to meeting our customers’ needs”, says Bailey. “We look forward to introducing further services in the near future.” Given the speed of development, that future will certainly be near.