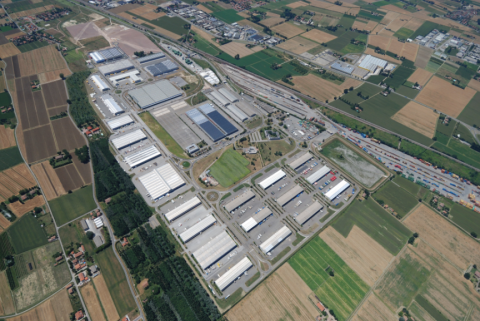 The Bologna Interporto terminal, positioned in northern Italy, started the year dynamically by launching new intermodal links with northern Europe. The destinations include port terminals Zeebrugge Cobelfret and Rostock. The services focus on the transport of P400s and involve two major intermodal players.

Hupac and Kombiverkehr lead the game of intermodal connections in Europe currently. They continuously add new destinations in their networks while utilising different focus areas in which they develop rail freight hubs.

Now they both turn their attention to Bologna Interporto and boost traffic along the Brenner Axis and the Rhine-Alpine corridor. “The work of the last few years is bearing fruit. We have continued to believe in it, and we are proud that the operators are finally basing their traffic on the Bologna Interporto”, comments Sergio Crespi, general manager of Interporto Bologna.

The Bologna-Zeebrugge Cobelfert connection started on 11 January, offering three roundtrips per week and focusing mainly on semi-trailers transport, including P400s. This is the second connection launched between the two destinations, with the first one commencing in 2019. In this link, Hupac is the multimodal transport operator (MTO), while the traction is provided by Mercitalia Rail. From Zeebrugge, there is the possibility to forward semi-trailers to the UK, Ireland, Sweden and Denmark.

On the other hand, the Bologna-Rostock service commenced a few days later, on 19 January. However, it has some similar characteristics. It also offers three weekly roundtrips, only that this time it focuses mainly on the transport of P400s. LKW Walter is the main customer of the service, which is operated jointly by Kombiverkehr and Mercitalia Intermodal.