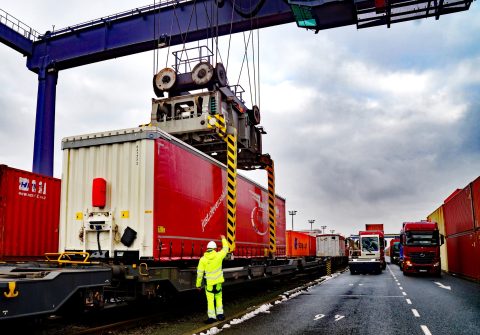 Kombiverkehr has added a new continental service between Nuremberg’s TriCon Terminal and Rotterdam Cobelfret to the 2022 timetable. The service is available for the transport of semitrailers, containers and swap bodies.

The Kombiverkehr train from Nuremberg to Rotterdam Cobelfret is a service operated in partnership with TFG Transfracht and runs five days a week, Mondays to Fridays in both directions.

The first train heading for Rotterdam departed the TriCon Container Terminal in Nuremberg on 13 January 2022, going in the opposite direction one day later on 14 January. Shipping line CLdN Cobelfret SA runs ferry services from the ferry terminal in Rotterdam to destination ports in London, Dublin and Killingholme.

“By offering the new continental train product, we are giving our forwarding customers a clear response to the shortage of resources in payloads and truck drivers that end-to-end road freight is experiencing at the moment, and not just on this corridor”, says Alexander Ochs, managing director of Kombiverkehr KG.

“We tailor our intermodal trains to the destination region, which makes it possible to switch directly to other means of transport without any transfer. The new Cobelfret product and the attractive closing times for acceptance and start times for unloading also enable us to deliver on our goal of offering end-to-end UK services.”