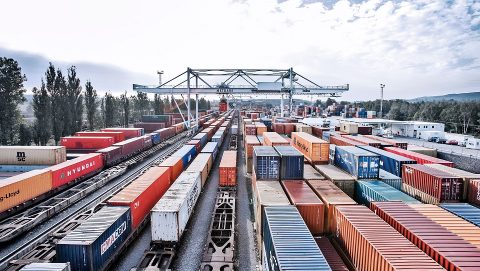 When several freight flows meet in one place, it causes a boom of the freight operations and leads to the development of the related infrastructure. This can be said about today’s Central Eastern Europe. More and more rail freight hubs have been strengthening their significance and new facilities have appeared in the region. That’s why the topic became one of the main issues to be discussed at the RailFreight Summit that was held in Poznań earlier this week.

For the third time in a row, ProMedia’s team landed in Poland for the new edition of the RailFreight Summit. This time the event for shippers and logistics experts took place in the Polish city of Poznań, an important rail freight hub on the European section of the New Silk Road.

“COVID-19 brings some difficulties for transportation. On the other side, we are growing on the New Silk Road”, Martin Koubek, Director for Silk Road at Metrans, aptly remarked when starting his presentation at the summit. The Czechia-based company has recently added a new intermodal terminal to its network. At the same time, the Polish railway undertakings are developing their own transhipment facilities. PKP Cargo invests in the well-known Małaszewicze Reloading Region, while PKP LHS works on the new connections to Sławków. What are the driving forces of this?

“First of all, it is important to have a big base of customers”, one of the visitors noted. Of course, this condition is compulsory for the logistics business but it’s not enough. Koubek in his speech focused on the hub-and-spoke model. His company has a well-developed network of the rail freight connections, which was arranged in accordance with the mentioned model.

“We started with one terminal in Prague to connect Port of Hamburg with Czechia. We grew year by year. Now we are working at 17 terminals and depots. Of them, we have five hub terminals that are located in different countries. Poznań is one of them”, Koubek said. The other hub facilities are placed in Prague and Česká Třebová (Czechia), Dunajská Streda (Slovakia) and Budapest (Hungary). Besides the hubs, Metrans operates 12 minor facilities, which the company classifies as the end terminals.

From the very beginning of its history, Metrans has been focused on the connections between seaports, mainly Port of Hamburg, and the hinterland countries such as Czechia. As of today, the railway undertaking is trying to integrate its regular lines with the New Silk Road connections. “The hub-and-spoke system is an advantage for the future of the New Silk Road. You don’t need to have a train from A to B, you can have a train from A to B and then to C, D, E, F, G, whatever. If you have an existing hub-and-spoke network, you can combine trains from different destinations”, Koubek emphasised.

The necessity of alternative routes and gateways also facilitates the development of hubs in the CEE region. It is no secret that the logistics companies are forced to arrange the new routes within the New Silk Road due to traffic congestions at the border crossings, especially between Belarus and Poland. “Without having problems at the Brest/Małaszewicze border crossing, nobody will be interested to go via different routes because of the costs”, Wolfgang Rupf from RTSB explained the key reason for establishing the new services. His company has extensive experience in these issues.

RTSB participated in launching the new train routes via Kaliningrad and the minor border crossings between Belarus and Poland such as Bruzgi/Kuznica and Svisloch/Siemianówka. At the same time, the new services attract more freight volumes and, therefore, stimulate the development of other intermodal facilities. Who heard about Kaliningrad before 2017 when RTSB tested the first service? Currently, it is a strong rail freight hub.

Another alternative gateway in Poland for the New Silk Road connections appeared at the beginning of the year when the first train from China arrived in Sławków, a westernmost terminus of the broad gauge railway in the European Union. Aleksandra Adamska from PKP LHS, the company that operates the Broad Gauge Line between Hrubieszów and Sławków in southern Poland, specified several advantages of the intermodal hub and the route in general.

“PKP LHS can transport 900-metre trains. For example, the trains from China, which run on our line, have 48-52 containers (usually, they consist of 41 containers – RailFreight). Also, we do not have any passenger traffic. It is a freight-dedicated line”, she noted. Moreover, Euroterminal Sławków is connected with several European facilities that create a good opportunity for transit trains to further destinations. Among the latest developments is the train from Xi’an to Milan via Sławków. “We are developing the list of these connections.”