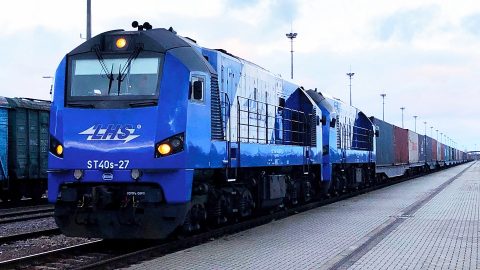 Poland has got a new rail freight link with China. The first container train from Xi’an to Sławków arrived at the final destination on Tuesday, 7 January, using the broad-gauge Metallurgy Line. At Euroterminal Sławków, 45 containers will be transhipped to lorries or standard-gauge flat wagons for delivery to customers in Poland, Scandinavia, Germany and Italy.

In the morning of 5 January, the freight train with 45 containers from Xi’an entered Poland. It arrived at the Hrubieszów railway station of the Metallurgy Line (Linia Hutnicza Szerokotorowa or LHS in Polish) after a 12-day journey from China via Kazakhstan, Russia and Ukraine. In the afternoon of 7 January, the Xi’an train reached Euroterminal Sławków, the final destination and ultimate station of the broad-gauge railway in Poland.

“I am glad that the train arrived quickly and safely to Poland, using the westernmost broad-gauge line. Thanks to this, we are expanding our transport and logistics offer with further intermodal products. This is a part of the company’s strategy focused on diversification of transport services and directions of transportation”, said Zbigniew Tracichleb, CEO of PKP LHS, the railway company that operates the Metallurgy Line.

The new route from Xi’an to Sławków is 9,477 kilometres long. It was launched by PKP LHS, Xi’an Free Trade Port Construction and Operation, Port of Gdańsk as well as logistics partners from Kazakhstan, Russia and Ukraine. The first delivery was performed in 15 days. However, the project participants plan to reduce the travel time between the termini to 10-12 days.

Moreover, PKP LHS intends to use the Middle Corridor, i.e. via Ukraine, Georgia, Azerbaijan and Kazakhstan, for launching new train connections from China to Poland. “Sławków is also the beginning of the Trans-Caspian International Transport Route (also known as the Middle Corridor), which creates a convenient opportunity to export food and thus to balance freight traffic to China. I am convinced that both routes will play an important role in the development of rail transport on the New Silk Road”, noted Dariusz Sikora, PKP LHS’s Member of Board for trade and operation.

Euroterminal Sławków has several logistics advantages for the customers including its broad-gauge railway link and geographical location. Due to the broad-gauge Metallurgy Line, this terminal does not require additional transshipment as does the Brest/Małaszewicze border crossing. From Sławków the containers could be easily delivered to other European countries by rail or road.

“It is a logistics hub with great potential for further distribution of freight from China, its concentration and shipment back”, added Sikora. The intermodal facility is situated in 25 kilometres eastward from Katowice and has regular rail freight connections to Gdańsk in Poland, Maddaloni in Italy and Schwarzheide in Germany.