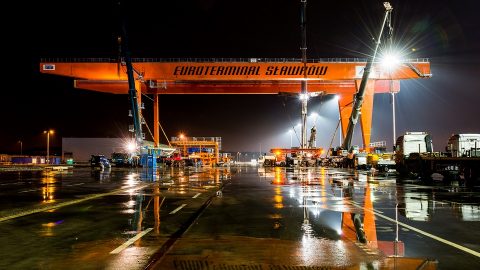 Sławków instead of Vienna: new hub on New Silk Road?

For over ten years a plan has been on the shelves to extend the broad gauge railway further into Europe via the Košice – Vienna railway line. This would provide a faster connection with the Far East. Although this plan is still under discussion, another viable broad gauge line deserves the attention: that of the Metallurgy Line running up to Sławków in Poland.

The Metallurgy Line (Linia Hutnicza Szerokotorowa in Polish) ends in the western terminus of Euroterminal Sławków, 25 kilometres eastward from Katowice. This 395-kilometre line runs in the southeastern part of Poland from the Ukrainian border to the Polish town. Whereas the Košice – Vienna extension ends in the hub of Vienna, Sławków is set to become another hub on the New Silk Road.

The Polish broad gauge railway was constructed in the 1970s for transporting the iron ore and coal from Ukraine to Katowice Steelworks (now ArcelorMittal Poland Dąbrowa Górnicza). After the dissolution of the Soviet Union, the railway lost a lot of freight traffic. Over the last two decades, the Polish government and state-owned railway company PKP LHS, which operates the line, are trying to revive the route by attracting other types of freight. Inter alia, containers to or from China could be a market.

The Metallurgy Line has several advantages compared to the planned Košice – Vienna route. One of them is a working intermodal terminal in Sławków. Euroterminal Sławków was opened in the early 2000s and is jointly owned by three Polish companies: Grupa CZH (over 81 per cent), PKP LHS and PKP Cargo (both own less than 10 per cent).

Euroterminal Sławków has the all necessary infrastructure for transferring containers from broad gauge rolling stock to the European gauge wagons as well as to the lorries. It is connected with the port of Gdańsk (by MAERSK Polska and CLIP intermodal) and to the intermodal terminals of Maddaloni in Italy (Stante Logistics) and Schwarzheide in Germany (Hupac).

Two other advantages of Euroterminal Sławków are the fact that a broad gauge line is already in place and its operation does not require huge investments. Moreover, it is strategically located to accommodate traffic flows to and from Asia, namely via the territory of Ukraine and through the Kovel railway junction.

When routing via Ukraine, additional custom and border proceedings are required. However, the parties concerned could negotiate a joint tariff for transit transportation and simplify the workflow. The same thing has been done by Belarus, Lithuania and Russia for transit traffic from Belarus to the Russian exclave of Kaliningrad via Lithuania. PKP LHS has already made some progress in developing the route via Ukraine. The company intends to launch a container train from Chengdu to Sławków. It will run via Ukraine, Belarus, Russia and Kazakhstan.

There is another, a little bit more expensive solution that allows logistics companies to avoid transit via Ukraine. It requires the construction of the 100-kilometre so-called Włodawa rail link from Tamashouka salient in Belarus to the Polish cities of Chełm and Zamość.

It will connect the Metallurgy Line with the broad gauge network of Belarus, the junction point of the new and existing route would be located in the city of Zamość. In comparison with the Košice – Vienna route, this route would be much cheaper. First, because of the shorter distance (100 versus 450 kilometres), second, due to the upgrading of the existing European gauge sections to the broad or dual gauge lines.

The main problem of the latter route is the bridge across the Western Bug River. Before World War II there was a direct connection between Chełm and Brest. In 1939 the railway bridge across the Western Bug River was destroyed during the German invasion. Since that time, the line is divided into separate sections. As a result, two railway stations with almost the same name exist in Poland and Belarus. Włodawa is on the Polish side, close to the village of Orchówek, while Vlodava is on the Belarusian side and near the village of Tamashouka.

Starting from the Polish station of Włodawa, there is a railway link to Zamość via Chełm that could be converted to broad gauge or dual gauge route. The Włodawa – Chełm section is almost abandoned and has no regular traffic while the Chełm – Zamość piece is used only for commuter services. Six years ago the Polish authorities proposed this line as an alternative to the Košice – Vienna route. But in course of time, this project has been postponed for better times. Perhaps, the right moment has come now.