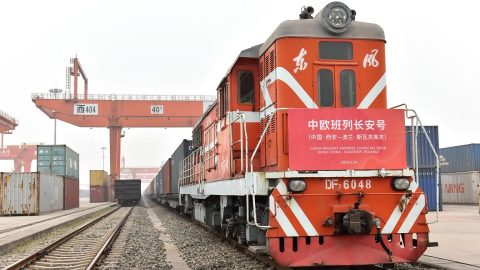 A new direct freight train has been launched between China and Poland. It connects Xi’an inland port to the Polish intermodal hub Euroterminal Sławków. The container rail service also provides a connection to the Port of Gdańsk and, as a result, it could be used for delivering freight from China to Scandinavia.

The freight train loaded with 45 containers departed from Xi’an on the morning of 24 December. It is expected to arrive in Sławków on 7 January after crossing Kazakhstan, Russia and Ukraine. This service was launched by PKP LHS, the Polish rail freight company that operates broad gauge railway to Sławków, and Port of Gdańsk together with Chinese partners. “Thanks to the shuttle train between Sławków and the Port of Gdańsk, our customers will gain new possibilities of mixing loads between China and Poland/Europe and China. The Port of Gdańsk supports partners in China,” noted Mateusz Dawidowski, Chief Representative of Gdańsk Port Authority in Shanghai.

For the Port of Gdańsk, this rail freight service from China is the second one within the last two months. In November, there was another train from Xi’an directly to Gdańsk but it ran on the different route – via Kazakhstan, Russia, Belarus and the Brest/Małaszewicze border crossing. The newly launched train use the Metallurgy Line, a broad gauge railway (of 1,520 millimetres) from the Ukrainian border to Sławków. As a result, the containers are transhipped on the way from China to Poland only once – at the border between China and Kazakhstan. In Sławków some containers will be loaded on lorries for the last mile delivery, Another part of containers will be transhipped to flat wagons operated on the standard gauge of 1,435 millimetres and will be departed to the Port of Gdańsk.

Such rail freight solutions allow the largest Polish seaport to diversify its network, to offer to its customers more convenient services and, of course, to add freight volumes. “Right now we have double-digit growth of freight coming from China. New services are supporting our growth and Belt&Road Initiative. This time we develop Sławków as a part of the project connecting Baltic, Adriatic and Black Seas. Customers can ship goods by sea and later use the shuttle train to Sławków in order to deliver containers to Kyiv, Odesa or any other city. If the clients send goods from Xi’an to Sławków, they can use Port of Gdańsk feeder services and transport goods to Scandinavia or the UK,” explained Mr Dawidowski. It is worth to note that Port of Gdańsk has six deep-sea lines to China (Tianjin-Xingang, Qingdao, Shanghai, Ningbo-Zhoushan, Xiamen and Shenzhen-Yantian). They are provided by two largest shipping alliances – 2M and the Alliance.

With the help of the container trains to/from China, PKP LHS wants to attract new types of cargo. Currently, the Metallurgy Line is mostly focused on the transportation of bulk freight. However, the company has already achieved certain success in the development of the container links. In 2018 it launched a rail freight service from Sławków to Urumqi. That connection runs via the Middle Corridor, i.e. Ukraine, Georgia, Azerbaijan and Kazakhstan. Also, the company intends to start a train service from Sławków to Chengdu. “The new service (from Xi’an to Sławków – RailFreight) goes via Kazakhstan, Russia and Ukraine to Slawkow. LHS is a part of the Middle Corridor initiative. They are planning new services with partners from Azerbaijan and Georgia,” said Mateusz Dawidowski.