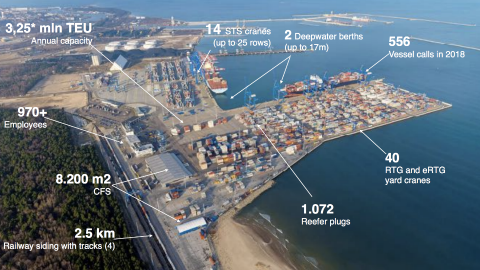 Fast growing port of Gdansk wants to double volumes by 2030

The Port of Gdansk wants to become the main gateway to central and eastern Europe in the coming years. This region is expected to grow in GDP by 48 per cent until 2030. This growth means a lot of new cargo for the port of Gdansk. The port will expand considerably, in particular in the DCT container terminal. This was said by Marcin Osowski, Vice President Infrastructure at the Port of Gdansk during the RailFreight Summit 2019 in Gdansk.

The natural hinterland of the port consists of the Czech Republic, Slovakia, Ukraine, Belarus and Poland. To Belarus and Slovakia it is preparing new direct rail connections, which are to likely to push the figures further. But also the national railway programme of Poland will contribute to the growing importance of the port. With the recent acquisition of the DCT container terminal by PSA Group, the figures could really be doubled in the next few years, the vice president believes.

The port on the Baltic Sea already has a modal split that many other ports only see in calculation models. With around than 33 per cent of container handling by rail, this modality is indispensable for the port. Taking into account the anticipated infrastructure investments, this could be raised to a modal split of 50 per cent, said Osowksi. To put these numbers in perspective, the north-sea ports of Bremerhaven and Hamburg saw a modal split of 46 and 43 per cent respectively in 2017. The port of Wilhemshaven handled 33 per cent of container traffic by rail; the port of Rotterdam 10 per cent.

In total, the port handled 50 million tonnes of all types of cargo in 2018. The forecast is to double these volumes to a billion tonnes in 2030. “The port of Gdansk wants to take back its crucial role that it enjoyed in the time when Poland ruled this part of the world. We were the gravity centre of trade in the region. This changed during the Prussian era, but it is changing again today. With developments such as the New Silk Road and the Brexit, our role as a European gateway is gaining importance again”, the vice president said.

His reference to the New Silk Road may be surprising to some, as the port has not until now taken a position on the railway link between Europe and Asia. The focus has been on deep-sea traffic rather than short-see connections that could link to the European hinterland. However, a direct rail link to Minsk is in the pipeline, with exactly the purpose to tap into the booming rail freight traffic between China and Europe.

Currently, traffic departing from Minsk reaches Gdansk either via the rail link through Warsaw, or via the Lithuanian port of Klapeida. The latter is the largest competitor of Gdansk in the Baltic sea. But with a direct rail link from Gdansk to Minsk this could be changed, argues Dominik Landa, Commercial Director at DCT Gdansk. The Belarusian capital is developing the Great Stone Logistics Center. “This will change local flows of a market worth 180 thousand TEUs per year.”

According to Landa, Gdansk has a competitive position for transshipment of cargo as the additional costs at the port are much lower than those in the port of Klapeida. “In Gdansk you pay for border transshipment; in Klapeida you pay terminal handling charges, feeder slot cost and inventory cost of stored cargo. The total cost of a feeder slot and inland transport to Minsk via Gdansk is 15 per cent lower than in via Klaipeda.”

According to Osowksi, the new rail link does not only enables Gdansk to compete with Klapeida, but also with Duisburg, the main European hub for Eurasian traffic. “With this rail link, we want to show that the port of Gdansk is able to position itself as a versatile port capable of handling the growing volumes coming from China.”

In addition to the connection to Belarus, the port of Gdansk is also preparing a direct rail link to Zilinia in Slovakia, to shorten the route that currently runs via Warsaw and Katowice. It already has a direct link to Ostrava in the Czech Republic, another country with a growing economy and impressive export volumes by sea. For example, the flow of cargo exported from the Czech Republic by sea to non-EU countries constituted about 27 per cent of the entire export in the previous years. With the deep-sea connections of Gdansk, it is an interesting gateway to the Far East.

The direct lines to the hinterland enable the port to compete with the port of Hamburg, explains Landa. “From Ostrava, the route to Gdansk is 30 per cent lower in costs than the route to Hamburg or Koper; from Zilina the costs are 20 to 50 per cent lower”, he noted. However, there is more work to be done aside from these shortened routes, said Osowski. “One of the main remaining hurdles is the maximum speed of rail freight traffic in Poland. This is 30kmph. In comparison, the EU average is 40kmph, while in Germany freight trains can speed up to 50 kmph.”

To the advantage of the port, Poland has an ambitious plan to improve the railway network of the country, fully realising its growing importance as a transit country. In its National Railway Programme till 2023, it promises to invest 15.5 billion Euros in the railway network. A total of 18,000 km of railway track will be modernised. “We not only have to improve speed, but also enable longer trains on the network”, noted Osowki.

Apart from the national improvement plan, the port itself has an expansion project. As Landa pointed out in his presentation, three Rail Mounted Gantry Cranes (RMG) will be installed in the coming months. These fully electrified cranes increase handling efficiency at the port, which currently operates with only 2 Rubber Tired Gantry Cranes. Moreover, the number of tracks will be extended from 4 to 7 and the maximum length of these track from 650 to 750 metre, both before the end of next year. “In total, we will have at least 4.5 km of track length with an axle load of 22.5 tonnes”, Landa stressed.

According to Osowksi, growth of the port is inevitable, even more so with the recent acquisition of the DCT container terminal the PSA Group, which owns a container terminal network spanning all over the world. “The possibility to grow has only increased with this new ownership”, Osowki pointed out.

The RailFreight Summit was held from 15-16 May in Gdansk and was the second edition of the event. Apart from the port of Gdansk, topics to be discussed were the New Silk Road, intermodal hubs and emerging markets in the region.