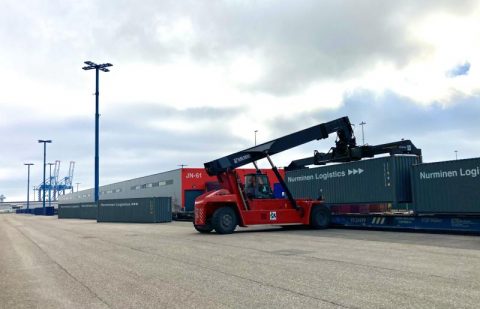 Nurminen Logistics has set up a service to Kazakhstan via the Middle Corridor, in cooperation with Kazakh State Railways (KTZE). The service is a combination of sea and rail transport: from Helsinki to Hamburg by ferry, and from Hamburg to Aktau via the Black and Caspian Sea.

This new route allows customers that cannot take the route through Russia to transport cargo between Kazakhstan and Finland, said Marjut Linnajärvi, VP Sales and Rail Operations, Nurminen Logistics. This includes companies with sanctioned cargo, for example, but also those that do not want to transit through Russia.

The multimodal route, when taken southbound, starts from the port of Helsinki to the port of Hamburg, where a ferry service moves cargo across the Baltic Sea twice a week. From Hamburg, the cargo is reloaded on the train, which leaves twice a week in both directions too.

The first consignment from Helsinki to Kazakhstan started its journey last week and the next departures will be in December. It is a regular service that will run in both directions two times per week. The goods can be transported in 40 HC shipping containers.

Many ways to Kazakhstan

Nurminen Logistics published its co-operation with KTZE for the first time in March 2022, when it was announced that Nurminen and Kazakh State Railways had agreed to commercialise the international Trans-Caspian route (Middle Corridor) between China and Europe.

The partners are still offering a service from Finland to Kazakhstan through Russia as well, but this is based on customer demand, Linnajärvi notes. “We offer this service based on the specific requirements of the customer.”

VR, the main railway company of Finland, does not provide traction through Russia at the moment, but there are other, private companies that can offer the service, she elaborates. The cooperation with KTZE in this regard also proves useful, as the company can provide rolling stock on Russian territory.