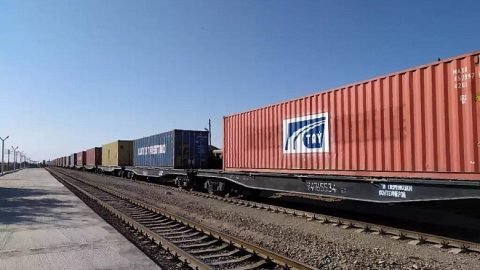 In over a month after launching the direct rail freight link to Afghanistan, China inaugurated a container train to another Central Asian state – Turkmenistan. The new service connects Kelif railway station in the eastern part of the country with the Chinese port city of Qingdao in the province of Shandong. At the initial stage, the container train will run once a month.

The first direct Turkmenistan-China train departed from Kelif railway station on 24 October. It is expected to arrive in Qingdao on Friday, 8 November, after a15-day journey. The 9,688-kilometre route crosses only the territory of Kazakhstan and bypasses nearby Uzbekistan. This in spite of Kelif being located in the eastern corner of Turkmenistan, just 20 kilometres from the border with Uzbekistan, and despite a direct rail link with the neighbouring country being available.

Such a complicated route was chosen due to two factors. First, it is entirely dedicated to the transportation of Turkmen potash fertilisers to China. This made Kelif railway station a logical departing point . Forty kilometres northwards lies the Garlyk mining and processing plant, which is considered  the largest producer of potash fertilisers in Turkmenistan. The first Kelif – Qingdao train consists of 45 containers loaded with 1,800 tonnes of potassium produced by the Garlyk mining and processing plant.

The course of the further route was however dictated by the organisers. Among the parties concerned in this project are the Transport and Logistics Center of Turkmenistan (a logistics subsidiary of Turkmen Railways), KTZ Express (a logistics subsidiary of Kazakhstan Railways) and representative offices of Kazakhstan Railways in Turkmenistan and the Xinjiang Uygur Autonomous Region of China.

In order to simplify the container service, they decided to connect existing services of railway companies in Turkmenistan, Kazakhstan and China. As a result, the train crosses the territory of Turkmenistan in the northwest direction, heading to the Bolashak – Serhetyaka border crossing near Garabogazköl lagoon. On the territory of Kazakhstan it turns northeastward, then southeastward and afterwards runs eastward to the Khorgos border crossing to enter China.

Before launch of the Kelif – Qingdao service, Turkmenistan served only as a transit country for the Chinese container trains heading to Iran. The first rail freight service from China to Iran via Kazakhstan and Turkmenistan was launched in January 2016. It linked the Chinese city of Yiwu with the Iranian city of Sarakhs situated close to the border with Turkmenistan. This train also entered the territory of Turkmenistan by using the Bolashak – Serhetyaka border crossing. The latter was opened in May 2013 within the construction of the Zhanaozen – Bolashak – Bereket – Etrek – Gürgen railway, which provides the shorter connection from Kazakhstan to Iran running in a north-south direction along the Caspian Sea.

The second test train from China to Iran crossed Turkmenistan in September 2017. It departed from Yinchuan and arrived in Teheran, the capital of Iran. Three months later, China tested two other routes to Teheran – from Changsha and Xi’an. Afterwards, in May 2018, the Bayannur – Teheran connection was launched between the Inner Mongolia Autonomous Region of China and Iran. All the trains ran the distance of around 10,000 kilometres in two weeks. They delivered to Iran various Chinese products including ceramic dishes and car parts.

The China – Kazakhstan – Turkmenistan – Iran route could be shortened by crossing the territory of Uzbekistan. This will allow logistics companies to reduce the delivery time by several days. Uzbekistan has joined this route in April of this year. However, there were no trains from China to Iran via Kazakhstan, Uzbekistan and Turkmenistan. All parties are now discussing a single tariff for transporting containers on the upgraded route.