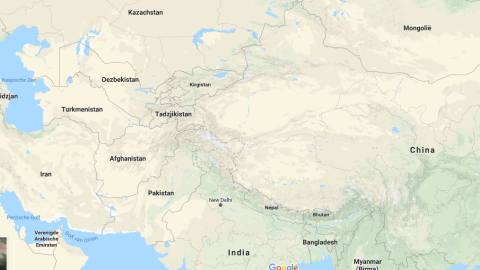 A new freight train service connecting China and Iran became operative last Thursday, 10 May. It departed from Bayannur city in north China’s Inner Mongolia Autonomous Region and left for Tehran, the capital of the Islamic Republic, where it will arrive on 25 May.

The train carrying 1,150 tonnes of sunflower seeds travels through Kazakhstan and Turkmenistan on a journey of 8,352 kilometres. The transit time of fifteen days means a considerable reduction compared to at least twenty days of travel time needed for ocean shipping, which starts from China’s Shanghai port and ends in Iran’s Bandar Abbas.

Bayannur city is known for its sunflower seed production. The city exports about 180,000 tonnes of sunflower seeds annually, with ninety percent of this production destined for Middle Eastern, European and U.S. markets. It is not the first Chinese city to be connected to the Iranian capital by rail. The first freight train took off from Yiwu in January 2016, followed by a second freight train service connecting Yinchuan and Iran in September that year.

The new rail freight service has received considerable attention, as it was launched against the backdrop of the announcement by US president Donald Trump to pull out of the Iran nuclear deal. In US media reports, the rail freight service is described as a sign that China intends to strengthen its trade relations with Iran.

Iran has also looked into the possibility of an Iran-Europe rail corridor, with Germany as its final destination and Turkey as an important transit country. Another potential route crosses western Europe to the Black Sea, where freight can be shipped to Georgia and then carried by train to Iran. German firms DHL, DB Cargo and DB Schenker are said to be included in planning the network.

In addition, Iran and Azerbaijan are extensively working together on an improved rail network through the region as part of the International North–South Transport Corridor (INSTC) project, a 7,200 kilometer-long freight route connecting India, Iran, Azerbaijan and Russia via ship, rail and road. A south-west offshoot of this corridor already connects Iran, Azerbaijan, the Black Sea and Europe.