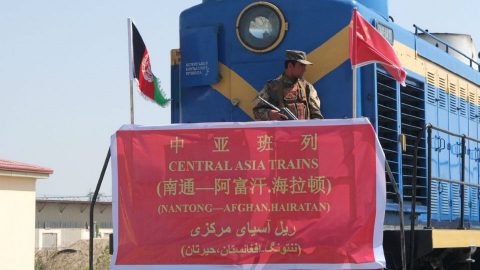 Afghan train to China is a fact

The first rail freight service between China and Afghanistan has officially been launched. A train loaded with Afghan export goods arrives in China this week. It is destined for the eastern province of Jiangxi and orginated from the Afghan northern city of Hairatan.

The first freight train between the countries marks an important step in promoting trade between the Asian countries. When the train entered Chinese territory, its arrival was celebrated by Kazakhstan, Uzbekistan and China’s ambassadors to Afghanistan, along with the Afghan Minister of Transport Yama Yari.

The train departed from Hairatan on Thursday September, loaded with 41 containers including 1,100 tonnes of Sang Taluk powder. The train crossed the Soviet-built Friendship Bridge over the Amu Darya into Uzbekistan. It then continued through Kazakhstan into China.

The train journey is 7,000 kilometers, which makes it a lot shorter than the maritime route from the Pakistani port of Karachi. While the rail journey takes around 14 days, the sea journey takes 45 days.

It is not the first time for the countries to be connected by rail. In the opposite direction, a freight train made its way along the route in September 2016. However, this service has not materialised up till now.

Moreover, in 2018 there were talks of a railroad connecting Afghanistan, Tajikistan, Kyrgyzstan, Iran and China. China has expressed interested in giving Afghanistan a role in the ‘Belt and Road’ project for several years. In 2016 Beijing and Kabul signed a Memorandum of Understanding, where China pledged at least 100 million US Dollars in funding. Afghanistan is very keen to receive aid for its undeveloped infrastructure. The new service is the first concrete step in this direction.