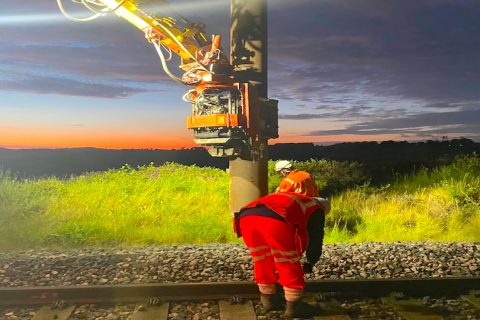 Work to lay the foundations for the electrification of the mixed-use Levenmouth Rail Link in Scotland is about to get underway. The first phase of work between Thornton Junction and Haugh Mill Lade will see the project pile foundations for masts that will carry overhead wires in readiness for the introduction of electric trains, which will replace an interim diesel passenger service on the line when it opens in Spring of 2024.

The Scottish government is investing over 116 million pounds (139 million euros) in a new line, connecting parts of Fife in Scotland to the national network for the first time in several decades. The project will be fully electrified, in a decision that emphasises a change of heart from the government, by installing electric supply from the start – a policy that has been welcomed after some high-profile infrastructure projects were heavily criticised for omitting overhead wires.

Foundations for a newly electrified railway

Work to install the piles (engineering foundations) will begin next week (Monday, October 24) and will last for about three weeks. Network Rail in Scotland say the first piles will be inserted to the west of the rail corridor – mostly during the day. One night of overnight piling will be required for locations closest to Thornton Junction, where the branch line interfaces with the existing network. This is scheduled for Saturday, October 29.

Further piling along the Levenmouth rail corridor is being programmed so that it works in tandem with other activities on the project, such as work on bridges and track laying.
“Piling is an essential part of laying the foundations for the newly electrified railway”, Network Rail told RailFreight.com. “It is among the noisiest work activities on the railway and can be disruptive. Homes closest to the work sites have been notified by letter to make them aware.”

Aspirations to decarbonise the railway

While the work is being delivered as part of the reinstatement of the branch, electrification of the line to Leven is part of the wider electrification of the railway in Fife as part of the Scottish Government’s plan to decarbonise passenger services on the network by 2035. Work on the Levenmouth Rail Link is scheduled to complete in spring 2024, and services will initially be in introduced using diesel trains. By this point, however, the line will be future-proofed to enable the introduction of Battery Electric Multiple Units (BEMUs) to replace life-expired diesel units, which will be phased out on completion of the wider Fife electrification project.

“The first piles going into the ground in the Thornton area is big for the project but also an important milestone for the wider aspirations to decarbonise the railway across Fife”, said Sean Clemie, the earthworks and structures lead for the project.“With the first mile of the Leven branch already operational railway, we can use this to move the track-based piling rig to each location to sink the foundations and then insert the masts that will ultimately carry the overhead wires that will power the railway.”

The project is primarily designed to carry a passenger service into the southeastern part of Fife, which was deprived of its trains in early 1969, when the entire coastal route, which also reached the famous golfing resort of St Andrews, was closed as part of a widely derided rationalisation of the British network. However, with the industry still an important part of the landscape in the area, the Scottish government has been eager to point out that provision is being incorporated into future freight services.

The Scottish government was heavily criticised for its “to a budget” policy on the high-profile Borders Railway project, which was completed without built-in provision for electrification nor capacity for freight services, and for their silence on the proposed extension to Carlisle, which would provide a new cross-border route, suitable for freight traffic.