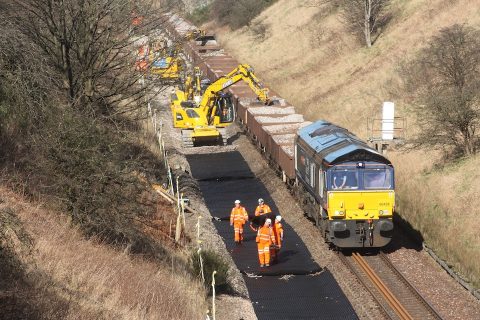 Enabling works have begun on the Levenmouth Rail Link project – a programme of works to restore a rail connection to communities in the east of Fife, in Scotland, severed from the network for decades. The five-mile (8km) project will give around 30,000 people a direct connection to the rail network and provide the potential for future freight links and economic regeneration.

Infrastructure management agency Network Rail, supported by the rail freight sector, has begun works by restoring the network connection at Thornton Junction. The switches have remained moribund since residual freight traffic to a distillery and a coal mine ceased in 2015. Now, infrastructure trains have begun to bring in the ballast, rail and materials at the beginning of the 116.6 million pound (129 million euros) construction phase.

Levenmouth is moving closer to the reintroduction of passenger services for the first time in more than fifty years.
Following the green light from the Scottish Government agency, Transport Scotland, for the scheme, Network Rail has started construction of the Levenmouth Rail Link. The work includes removing the old trackbed and other route preparation activities in advance of the reinstatement of a double-track railway to Leven.

Campaigners elsewhere are watching the progress closely. Groups in the North East of Scotland and the Scottish Borders seek to restore lines connecting communities such as Peterhead and Hawick to the national network. Their proposals also seek to utilise much of the existing trackbed as a cost-effective delivery of capacity for passenger, charter and freight service growth.

Opportunities for freight and charters

The Levenmouth project follows on from successful reconstruction projects, including the Borders Railway and the Airdrie – Bathgate line, the latter of which provided an electrified high-capacity additional mixed-traffic route between Glasgow and Edinburgh. As well as two stations, the programme will also include the potential opportunities for freight and charter train operations.

Network Rail say the Levenmouth Rail Link is being delivered through an ‘integrator model’ which brings together a range of contractors with the skills, disciplines and capabilities to efficiently deliver the project on behalf of Scotland’s Railway – the brand name for the soon to be government-controlled network in Scotland. It is expected that the line will open in 2024.

“New rail links bring many additional benefits such as connectivity to the wider economic area”, said Bill Reeve, the director of rail for the Scottish government’s agency Transport Scotland, who pointed the Edinburgh – Tweedbank railway as an example of success, and one that has sparked campaigners to lobby for extension to Carlisle. “Our experience from the highly successful Borders Railway project makes clear the maximum benefits of the railway investment are realised where they are delivered as a package of improved transport measures and underpinned with community initiatives and projects. That is exactly what we are doing at Levenmouth as we work towards our decarbonisation and net-zero targets.

The local authority has been in full support of the project. “The aim being to benefit people already living here and attract new business,” said the joint head of Fife Council, David Ross. “It’s critically important because our Levenmouth Reconnected Programme will maximise the economic and social value of the new Levenmouth railway – developing initiatives and projects that build on the railway investment-led opportunity.”

The photo at the top of this article is not on the Levenmouth branch. Looks like it was taken near Lochmuir summit, between Markinch and Ladybank.