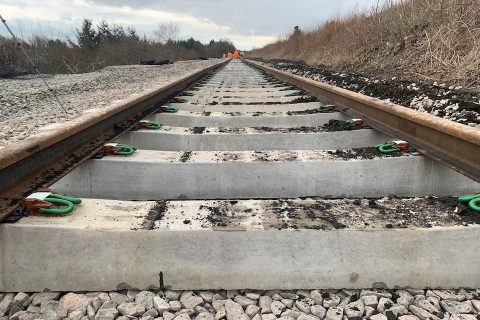 It may not have quite the profile of HS2, but a short line project in Fife is fast-tracking a community back onto the national network. Rail freight is playing a pivotal role and will have the opportunity to benefit from the project too. The new branch line being laid to connect several communities east of Fife will have freight infrastructure in mind, and commercial neighbours are being encouraged to take note and register interest.

In what has been described as a milestone for the project, the first rails have been laid to serve the Levenmouth Rail Link, which will reconnect the town to the mainline passenger network for the first time in more than half a century. The connections were prepared recently at Thornton Junction on the west end of the route, and trains have been delivering the first new sections of rail on the project that will eventually see 19 track-kilometres of mainly double track installed to create the branch line.

Unlike recent projects in the Scottish Borders and between Airdrie and Bathgate, some rails were still in place on the remnants of the branch. These existing track sections within the first mile of the rail corridor were utilised to deliver the new ballast, sleepers and rails to where they would be needed.

The old track was then lifted, and the top layers of ballast were removed back to the formation level of the trackbed. The trackbed could then be quickly re-formed with the materials all to hand. The specialist plant positioned the concrete sleepers in batches of seven, covering 72 metres per hour, creating the early chance to put down the first of the new rails.

Seven pairs of continuously welded rail sections in 240-metre lengths were positioned on the sleepers before being clipped into place to form the first mile of the new Levenmouth branch line. “Laying the first rails on the new rail link is a tremendous milestone for this exciting project and great news for the local community”, said Bill Reeve, Director of Rail at Transport Scotland, the Scottish Government’s overarching transport management agency. “The Levenmouth Rail Link will provide sustainable connectivity for the communities of Leven, Methil, Cameron Bridge and the wider area, and will attract people to visit, live, work and invest in those communities.”

Opportunities for freight connections with adjacent industrial sites – including a distiller that was a previous rail freight user – are included in the 116,6 million pound (140 million euro) project, scheduled for completion in Spring 2024. “Our Programme for Government made a commitment to decarbonising Scotland’s Railway, and growth in rail use is an essential part of decarbonising the total transport mix”, explained Reeve. “This scheme will re-open the disused rail line between Thornton junction and Leven, providing services through Fife to Edinburgh, Dunfermline and the wider rail network.”

The project comes as a welcome piece of positive news on the back of a disappointing report from the Scottish Government. Their long-awaited second Strategic Transport Projects Review (STPR2) laid out many plans for road improvements but was scant on any detail or intentions for any significant rial projects – such as the vigorously lobbied Borders Railway extension to Carlisle and the reinstatement of lines in North East Scotland. The only notable new rails being laid elsewhere in Scotland are commercial projects to establish Mossend International Railfreight Park near Motherwell and the long-delayed terminal at the Highland Spring mineral water bottling plant in Blackford Stirlingshire.

However, there is a much more positive air around Fife. “Even at this early point in the work, laying the first rails feels like a symbolic event that will be warmly welcomed by all of the people who have worked hard to make this project a reality”, said Joe Mulvenna Project Manager for the Levenmouth Rail Link. “Utilising much of the existing trackbed and extensive preparatory work has enabled the project to get quickly out of the blocks, and we can already see the project taking shape, but there is still a long way to go. With the first rails down along the first mile, the focus will turn to other aspects of the programme – particularly work on some of the structures – but it is great that the project has got off to such a great start.”