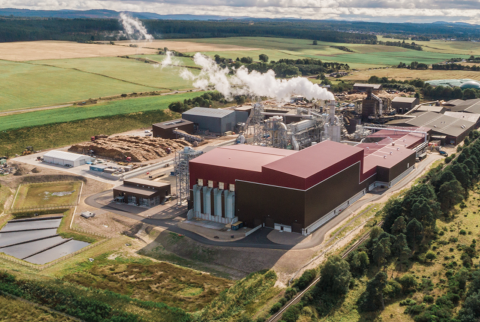 Company rail connections back in fashion

Growing confidence in the rail freight sector has seen significant development in multi-user rail terminals around the UK. Now, with the agenda shifting towards environmental imperatives, the advantages of bespoke corporate rail facilities are appealing to a new generation of businesses, as more seek a modal shift onto rail.

The recently upgraded Inverness – Aberdeen line runs parallel to the perimeter of Norbord, a global wood products company with extensive operations across Europe. The company serves the UK market from three sites, two of which are neighbours to the rail network: their Stirling plant in Central Scotland, and at Inverness, in the Scottish Highlands.

Ever since the First Minister declared a climate emergency just over a year ago, the Scottish government has more actively encouraged rail connection for businesses. Norbord has been a prime candidate, with their north of Scotland plant generating over 300 heavy goods vehicle movements a week. With expansion plans in hand, reducing road traffic is on the agenda.

Government ministers are in discussions with the company, and a spokesman for Norbord has told local media that they would support the development of the rail infrastructure in Inverness. The upgraded railway line is, in part, intended to carry more freight. The location of the plant, in our featured image, is adjacent to the regional airport and a planned passenger station.

Infrastructure agency Network Rail undertook the upgrade of the 100 mile (160 km) Inverness – Aberdeen line with developments like this in mind. “We are committed to encouraging more businesses to transport their products by rail”, they told local media. “We are working with Norbord and the rail freight industry to explore options at this location.”

Lobby groups around the UK have long campaigned for more freight on rail, and argued that corporate developments are an important part of future expansion. Support, such as the UK government Mode Shift Revenue Support scheme, and Scotland’s Freight Facilities Grant, are available, even though lobby groups, such as Transform Scotland say that the support framework should be more extensive (reported here).

The numbers, and the environmental benefits already stack up for Highland Spring, the mineral water company in Scotland. They are already building their own terminal at their bottling plant in Blackford, near Perth. Inauguration of services is due later this year.

Other examples of corporate facilities already exist around the country. The bulk aggregates sector has long taken advantage of rail to transport loads from quarries and distribution sites. Operators like Cemex have taken advantage. That company recently upgrading its Salford site in Greater Manchester, and at Selby in Yorkshire (see RailFreight coverage here).

A toast to future facilities

While rail network development has been driven in recent years by passenger demand, local rail development groups have urged national and devolved governments to build in freight capacity. The Scottish government is actively looking at freight provision on a forthcoming project to reconnect the Fife community of Leven. For Scots, the importance of freight on that route could not be more important – given that the line directly serves a huge whisky manufacturer.