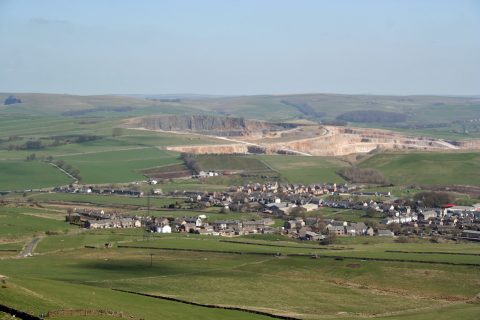 The aggregates conglomerate Cemex is looking to build on its relationship with rail in the UK. They have already upgraded facilities at their Derbyshire quarry, and their handling facility in Salford, Greater Manchester. There is scope for more, says their man David Hart.

As the British arm of the multi-national building materials firm, Cemex UK has been growing its presence in the industry. Its liveried locomotives are a highly prominent part of network traffic up and down the UK, and there could soon be more opportunities to spot their heavyweight loads supporting the British construction industry.

If you have seen the ‘Cemex Express’ – a named class 66 diesel workhorse that is part of a deal with GB Railfreight – you will know that Cemex is making the most of its credentials across the country. However, David Hart, supply chain director for the UK and France, says it is much more than a one hundred tonne marketing tool. “The transport of our product by rail is of ever-increasing importance to Cemex as we look to make our operations as sustainable as possible”, he said.

Environmental considerations and construction have become unlikely bedfellows in the last decade, with green and clean credentials critical to most contracts. Cemex has not stood still in that respect. They are not just moving more by rail, they are improving the rail environment too, starting with their receiving facility in the fast redeveloping centre of Salford.

With high-rise cranes visible on all points of the compass, all around their Hope Street facility in Salford, there is plenty of commercial incentive to make the site as efficient as possible. Hart’s figures suggest that this is where rail is best placed. “Cemex UK currently transports 2.6 million tonnes of aggregate by rail each year which equates to approximately 100,000 trucks off the road. That is enough to build 40,000 houses. We want to continue to build on this”.

Having started the Salford project in 2019, Cemex have plans for this year too. They include upgrading the remaining track at Salford, investing in their Yorkshire railhead at Selby, and continuing work at Dove Holes, their major quarry site.

At Dove Holes, the company took over infrastructure from Network Rail, and is currently pouring concrete on two new loading facilities. Being their core business, that is a project they will want to get just right. It is not just the concrete that they are waiting to cure.

The company has plans to add at least two more rail depots to their roster, bringing the contingent up to sixteen sites, nationwide. Cemex UK claim they can transport 50 aggregate trains a week, which they say equates to three million tonnes of aggregates a year transported by rail, in addition to a business that moves one million tonnes of rail landfill annually.

Collaborate for the environment

“Rail is a far more environmentally friendly method of transport than trucks on the road, as a train burns significantly less fuel per ton-mile than road vehicles”, says Hart, who went on to mention the fleet of locomotives in their corporate colours. “We are very proud of our partnership with GBRf and hope that together we will be able to transport more and more by rail safely whilst reducing the number of truck movements”.

When it comes to aggregates, building materials and cement, Cemex has rail firmly in the mix.