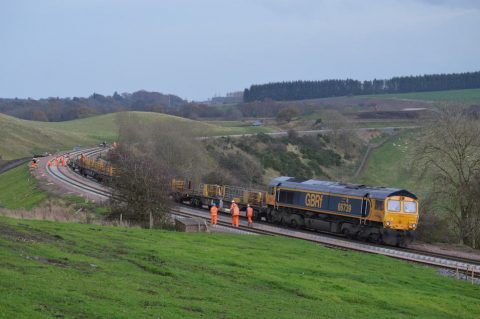 UK’s influential High Speed Rail Group proposes a significant new-build line between England and Scotland to complement the east and west coast main lines and solve capacity issues. The group, representing member organisations from across the industry, made this recommendations in  a new report: High-Speed Rail and Scotland.
The UK government appointed National Infrastructure Commission has been recommended to support construction of a new cross-border rail link between England and Scotland. An enhanced freight and passenger network should take full advantage of capacity released by HS2 and to cope with future demand for rail traffic.

One of the report’s key recommendations is completion of the existing Borders Railway – a commuter line south from Edinburgh, which the High Speed Rail Group say should be upgraded and extended as a through route, and made fit to carry freight traffic, principally timber from forest plantations locally. “Joining the route would enhance connectivity between the two nations,” says the report, paving the way for a significant reduction of carbon emissions in line with the Scottish government 2045 net zero target, and levelling up investment and opportunity in the north of England in the post pandemic economy.

The railway would represent a reinstatement of a line closed in 1969 as part of a radical rationalisation of the UK network. Nick Bethune, who is secretary of the Campaign for Borders Rail, says the report vindicates the efforts of the lobby group, and widens the debate on modal shift to rail. “The report shows that the line would be a strategic arm of the national network”, he says. “The collateral economic benefits of taking heavy goods off rural road routes are there to see. With environmental considerations moving up the agenda, there are many places around the UK that would benefit from as radical a modal shift as is proposed here.”

While the National Infrastructure Commission does not have a direct remit to cover Scotland, the devolved government there collaborates with Westminster through its own agencies. The report observes that significant growth in cross-border freight traffic can be expected, with, for example, the large-scale expansion of Mossend freight terminal near Glasgow already underway – as RailFreight.com reported. The Scottish government too has expressed a greater interest in rail freight growth, as part of their ambitious zero-carbon programme.

The report, which has been produced by the independent policy research group Greengauge21 on behalf of the High Speed Rail Group, says that boosting capacity through linking with HS2 will ensure that cities, towns and regions along the lines of route can grow and thrive at a time when they need it most, and deliver on the UK government ambition to level up the economy across the country.

Other freight specific developments are recommended. They include dynamic freight loops for the East and West Coast Main Lines – a relatively rare operational arrangement in the UK, but employed on the Borders Railway, and widely used in continental Europe. There is also an ambitious proposal for additional segregated freight capacity over entire 200 route miles (360km) between Newcastle and Peterborough.

The development of HS2, and the anticipated running of HS2 trains northwards to Glasgow and Edinburgh, over the existing rail network, will present operational challenges. The pathing of more mixed traffic on the coastal routes, says the report, strengthens the case for reinvigorating the inland ‘Settle and Carlisle’ line, and joining it to a rebuilt railway in the Scottish Borders, formerly known as the ‘Waverley Route’.

In additional to expected freight growth, the report author, Jim Steer, says the environmental benefits are such that the economic advantages have become even more prevalent, especially in the months of lockdown in the UK. “We have all seen the positive impact on air quality and the environment”, he said. “While we now focus on our economic recovery, we cannot lose sight of the carbon-cutting goals we have set ourselves. As transport is now the largest contributor to the UK’s emissions, the sector has a duty to act quickly and decisively to reduce them.”

The 66-miles (106km) of new railway required for the Borders Railway would be the single biggest reinstatement of a closed line in the UK. If the report is accurate, it may well not be the last, by some considerable margin.