How can Lithuania become the new rail freight hotspot?

There are many emerging rail freight markets currently, and Lithuania is among them. However, the Baltic country is making a difference. Its position, developing infrastructure and focus on rail freight could make it the new eastern European hub. How does Lithuania aim to make the most out of its potential?

For a country with a rail freight modal split of almost 70 per cent, Lithuania does not get enough attention. Recent geopolitical developments concerning its relations with Belarus or China have put it in the spotlight for all the wrong reasons. Nevertheless, the Baltic country is relaunching itself and attempting to become a hub based on three pillars: the Rail Baltica project, the port of Klaipeda and the Kaunas intermodal terminal.

The goal is to become a crossroad for traffic from all directions. From the east to the west, north to south, and overseas destinations by utilising its port facilities. Gytis Mažeika, director, development and international cooperation at the Lithuanian Ministry of transport and communications, stated clearly during last Friday’s RailFreight Live webinar that Lithuania “can become a hub and is open to new investments and partnerships.”

It is impressive to see a small country like Lithuania using rail freight for most of its inland transport operations. The modal split of rail reaches almost 70 per cent, positioning the country among the leading European states in using rail freight. Even countries like Germany, which are considered traditional rail freight forces, come second to Lithuania.

“Of course, many operations still take place by road,” said Mažeika. However, they are limited as much as possible to last-mile operations, and rail freight has the central role. “The fact that rail has such a strong position should become an incentive for logistics companies to take a look at Lithuania from a different angle and include it in their international routes,” he added.

If we look at Lithuania’s position on the map, one thing is clear: the Baltic state is indeed a crossroad. It borders Belarus and Poland while it has direct access to the Baltic sea. This makes it ideal for all kinds of traffic. It can become a gateway to and from Russia, the CIS countries, Central Asia and China.

Moreover, it can become important on the north-south axis with links extending from Scandinavia to the Black Sea via Ukraine. In fact, many Ukrainian trains transit towards Lithuania and the port of Klaipeda and use it as a gateway to the Nordic countries.

A crucial component of international connectivity for the country is the Schengen border crossing solution that can be applied between the EU and Belarus, allowing trains to cross the border in just thirty minutes. Combined with the double gauge in which the country operates (1520 mm and 1435 mm gauge networks), train transit can be substantially fast and efficient.

Speaking of the port of Klaipeda, it is essential to mention that it constitutes one of the three enablers for more traffic through Lithuania. The other two are the Rail Baltica project and the Kaunas intermodal terminal. Starting with the port of Klaipeda, Mažeika was explicit. “It can function in the same way as Kaliningrad,” he stressed. It is a multifunctional, ice-free port that has the needed capacity to forward freight across the Baltic, north European and Scandinavian ports. It can become the final destination for many westbound trains coming from eastern Europe and Asia.

On the other hand, the Rail Baltica project is the country’s flagship. The infrastructure upgrades and construction that are part of the project make Lithuania and the broader Baltic region more competitive when it comes to rail. The plan has seen and keeps seeing many developments. It will improve connectivity between Lithuania and Latvia via the Kaunas-Panevezys rail link, while plans foresee new rail links with Poland by 2026. Finally, the project enhances domestic connectivity with a dedicated rail link between the country’s biggest terminals these of Kaunas and Vilnius.

Since Kaunas is mentioned, it is important to say that the intermodal terminal is the latest addition to Lithuania’s rail freight portfolio. The terminal started operations last July with the first rail link from Tilburg in the Netherlands. The Lithuanian Railways cooperate with the GVT Group of Logistics for this service. Their partnership confirms the country’s potential since GVT wants to use Kaunas as a gateway to Russia and beyond.

Are you interested in learning more about Lithuania and the opportunities it offers? In RailFreight.com, we make it possible for you. As we aim to monitor the latest developments in the rail freight industry, we launched a new concept for 2022, the RailFreight On Tour. In tis project, we try to highlight new rail destinations, and Lithuania is on our agenda.

Are you interested in meeting with the Lithuanian rail freight industry and exploring business possibilities in the Baltics and beyond? Then join us in Vilnius, Lithuania, on 5 and 6 April 2022. You can find more details on the event here, and you can click here to stay up to date with all the latest news. 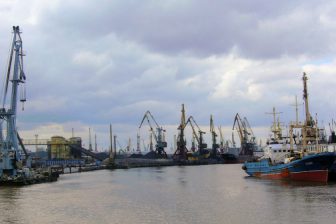