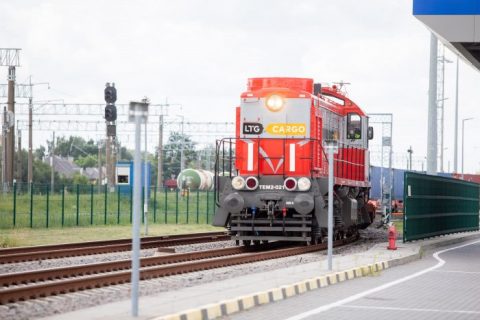 Monday, 19 July, marks the day that the Kaunas Intermodal Terminal (KIT) in Lithuania opened for commercial traffic as part of the Rail Baltica railway. The first train loaded with containers and semi-trailers arrived from the GVT terminal in Tilburg, the Netherlands. The new train service that started last week will operate two times per week. As of September, the service will have three trips per week in the timetables.

“The new service is open for containers, trailers and non-cranable trailers,” mentioned Roland Verbraak, General Manager of GVT Group of Logistics, some weeks ago when he first introduced the new project. As for the KIT, it is part of the Rail Baltica project and can become an important node for railway traffic between Europe, the Baltic states and the Far East. “That is why for GVT, Kaunas could also serve as a transit hub for China traffic,” added Verbraak. From Kaunas, it is possible to connect to the Russian port of Vladivostok, which is situated near the east coast of China and forms a vital transit hub for cargo to and from China.

According to Karolis Sankovskis, CEO of LTG Infrastructure, “one of the most important features of KIT is that the terminal is prepared to load not only containers or other types of freight but also truck trailers”. Moreover, the fact that it can operate in two track gauges (1435mm and 1520mm) makes it ideal for cargo transhipment between Russia and Europe.

“The opening of the European standard gauge railway route will allow to capitalise on the section between the Polish-Lithuanian border and start initial freight shipments even before the full Rail Baltica project is developed,” said Adis Driksna, CEO of RB Rail AS (Rail Baltica’s joint venture). In particular, this first train service between Tilburg and Kaunas will be the reference point for developing more services that could extend in the whole Rail Baltica corridor in the long term.