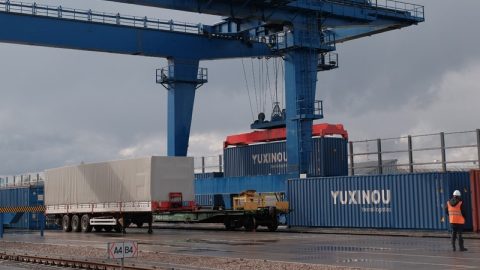 In the past few years, many new routes have sprung up on the New Silk Road. With the continuously rising popularity of rail transportation between Europe and China, there was need of alternatives to the traditional route taking through the Polish-Belarusian border. Anno 2020, the route via Kaliningrad has proven most successful.

That is if you ask RTSB, a leading rail forwarder on the New Silk Road. Back in 2017, it was one of the first to ‘give Kaliningrad, Svisloch and Grodno a try as alternative border crossings to the main corridor Brest – Terespol’. The crossings at Svisloch and Grodno are alternatives on the Polish-Belarusian border, whereas Kaliningrad is a Russian enclave between Poland and Lithuania. Freight trains are routed through Lithuania after crossing Belarus.

“We found Kaliningrad to be the most effective option so far, established the enclave as a working alternative and now run three to four trains a week between Kaliningrad and Duisburg as well as Ludwigshafen. Besides that, our express train from Xi’an to Neuss links through Kaliningrad three times a week with a lead time of only 14 days”, says Wolfgang Rupf, Managing Director RTSB Schweiz.

From the enclave, there are multiple options for further transportation. The territory lies on the Baltic Sea, which is coming up as an efficient link in the multimodal network between Europe, CIS countries and China. “The Baltic ports as well as the Kaliningrad region offer an existing, stable network with reliable schedules already proven to be effective”, Rupf explains.

“Freight is taken directly to the ports, then going right on feeder ships to destinations in Scandinavia, Benelux or Great Britain. By using those multimodal connections, we are able to absorb additional volumes between China and Europe, releasing the tension on the border between Brest and Malaszewicze. By channeling more containers through the Baltic ports, the operational costs including transloading can be reduced due to economies of scale, making this route competitive. These advantages of the multimodal offer result in increasing interest.”

Ever since the launch of the rail freight route to Kaliningrad, the connections formed were numerous. Some noteworthy routes: Chengdu-Rotterdam, with sea shipments from Kaliningrad to the Dutch harbour, or Kaliningrad-Rostock-Verona, with a sea leg between the Baltic ports. But the route through the enclave also proves efficient for rail-only transportation. This became evident with the launch of the Xi’an-Neuss Express, the fastest rail link between China and Germany so far. Thanks to the detour to Poland, the transit time of this journey is fourteen days.

“The Baltic sea ports are an interesting alternative gateway to German, Dutch and British ports, but also to the Nordic countries”, says Wolfgang. “Trade between the Nordic countries and China is growing, especially now that Russia lifted the ban on transiting food products. The Baltic ports as well as Kaliningrad offer
a fast multimodal connection to block trains to China as a faster alternative to the sea link along the Polar Silk Road for transporting those perishable goods.”

Apart from these alternatives on the northern routes, great efforts have been made to establish an alternative via the Caspian sea ports. The Middle Corridor, as this multimodal connection is called, has steadily increased in terms of volumes, albeit not as rapidly as the Kaliningrad option.

“RTSB has been involved in the development of the Middle Corridor since our first involvement in the BRI (Belt and Road initiative): we operated the first train between Poti and Baku in cooperation with our subsidiary Intermodtrans GmbH in 2014 and the first freight train from Chengdu to Poti in 2015.”

“Ever since the formation of the TMTM committee in 2014, stronger cooperation between the countries involved has been built, making this route more and more accessible. Effective rates for container transportation and tariffs for the transport of conventional goods along the route were adopted. We believe this route will gain popularity as the cooperation develops and becomes more stable because it is in fact very attractive, especially for transports to South-Eastern European countries.”

Wolfgang Rupf will be speaking about the topic of route development at the upcoming RailFreight Summit, taking place from 1-3 September in Poznan. “With an increasing number of countries and markets relying on rail transportation, many new routes developed during the first half of 2020, not only to ensure the supply during the pandemic”, he revealed.

The latest product of the company is the Vilnius- China relation, which was formed in April this year. “Trains run weekly between three cities in China (Xi’an, Chongqing and Shilong) and the Lithuanian capital in cooperation with UTLC.” Other new services launched this year were the direct, weekly connection between Ludwigshafen and Xi’an, shifting the transport of chemical products from sea to rail and the new service between Chengdu and Liège in Belgium.

“We were also able to establish a train link between China and Switzerland. In cooperation with Schweizerzug, RTSB now offers weekly connections between Frenkendorf (near Basel)/ Niederglatt (near Zurich) and Xi’an/ Hefei in China. With transit times of only 15 (Hefei) and 18 (Xi’an) days, these train links make an efficient and fast alternative to sea freight or public train connections through Germany, usually used for Swiss freight transportation.”

“We believe testing new routes is very important. It has been our goal to connect the European hinterland to major hubs and gateways to the CIS and China ever since our first involvement in the initiative. Nevertheless, strengthening and improving our main routes is also important in order to stay competitive”, says Rupf.

According to him, the main route via Poland-Belarus will remain the main corridor, especially considering the large investments currently made to improve the network. “Malaszewice – Brest has proven to be effective and capable. A lot of work has been done to meet capacity shortages and cut wait times.

“Yet, with always growing demand for rail transportation between Europe and China, alternative routes are needed to further improve transit times and relieve the traditional corridor. Especially for trains to South-Eastern European destinations or the Baltic and Nordic states, border crossings in Ukraine and Kaliningrad are interesting options.”