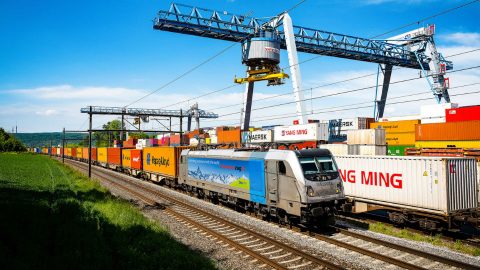 As many factories in China have returned to normal operations after the recent COVID-19 outbreak, first signs of capacity shortages for both air and sea freight are starting to emerge. To address growing demand in challenging times, RTSB Schweiz AG and Schweizerzug AG have formed an alliance to offer a new rail freight service for maritime containers between Switzerland and China. The new connection will start on 1 April 2020 and is set to be an efficient and cost-effective alternative for shippers looking to safeguard the flow of their supply chains.

RTSB and Schweizerzug start by offering weekly departures for each direction. Their China service connects Frenkendorf near Basel and Niederglatt near Zurich with the two Chinese hubs Xian, which is centrally located, and Hefei, based on the east coast. Important industrial centres such as. Shanghai, Hangzhou, Suzhou, Wenzhou, Taizhou, Ningbo, Nantong, Changzhou, Nanjing, Jining, Linyi and Qingdao are easily accessible via those hubs.

The partners offer door-to-door connections in both China and Switzerland, as well as an efficient customs system preventing additional waiting times at the respective border stations. But what might be most important in times like these: with a transit time of approximately 15 days to Xian and 18 days to Hefei, the new rail link slashes in half shipping time on the Rotterdam – Shanghai route when compared to sea freight.

A dedicated rail connection between Switzerland and China has not just been a hot topic for the logistics industry for a while, but political leaders have been pursuing this idea for some time, too. In April 2019, Switzerland’s president signed a cooperation agreement with his Chinese counterpart to back China’s Belt and Road Initiative.

A great number of high-level delegations have been travelling back and forth between the two countries, aiming to establish connections and educate Swiss companies about the many benefits of the project. The market’s response so far has been very positive.

However, Wolfgang Rupf, Managing Director RTSB Schweiz, points out: “Due to the lack of cost-efficient alternatives so far, many Swiss shippers are used to ocean freight for cargo to and from China. Our new product offers a viable alternative and we are looking forward to catering to the market’s demand. Of course, every new product launch requires some lead time, but we are confident to see volumes grow quickly.”

Roman Mayer, CEO Schweizerzug, explains the timing of the product launch: “With our new rail link between China and Switzerland, we are providing the market a reliable alternative for urgent or valuable cargo. Due to the corona outbreak, many economic players fear supply shortages in the coming weeks. We are offering solutions.”

China is Switzerland’s most important trading partner after the EU and the US. Currently, the majority of rail freight volumes between the two countries runs via large German hubs such as Duisburg and Hamburg. Austria, Hungary and Ukraine have emerged as hubs for Eastern European countries. However, these connections feature relatively long lead times, making rail freight to and from China a less competitive option. With the new Switzerland – China link, this is about to change.

At the RailFreight Summit Poznan, route development between Europe and China is among the topics on the agenda, and RTSB is represented on the programme by Wolfgang Rupf. During this presentation, he will discuss the latest route developments.

Registration for this event is open now.