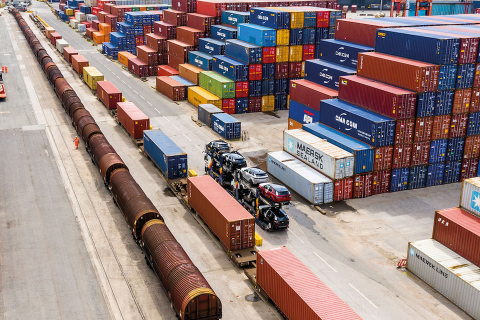 Maritime, the integrated rail and road logistics operator, has signed a deal that will significantly expand its intermodal handling capabilities at the port of Liverpool. The project will more than double the footprint of its operational base within the port. Maritime has already committed to expanding its presence in the north of England with a recently announced facility in Wakefield, in Yorkshire, a short journey due east from Liverpool.

With several factors combining to increase the importance of Liverpool in the UK economy, the port is regaining its strategic importance. In an agreement with Peel Ports Group, which runs the port of Liverpool, Maritime has gained understanding to expand its primary intermodal storage facilities. Growth in Transatlantic and Irish Sea trade and congestion around the South East of England are all contributing factors.

Maritime Transport is set to expand its existing transport depot at the Port of Liverpool. The multi-million-pound project will see the facility increase from four acres to ten acres (1.6 hectares to 4 hectares) with a new storage yard for loaded containers, significantly enhancing their operations in the northwest of England.

The announcement comes just after completing Maritime’s 8,1-acre (3,2 hectares) transport depot. That facility, located on Normanton Industrial Estate in Wakefield, less than a mile away from the Maritime Intermodal Rail Terminal, directly serves the West Yorkshire conurbation around the cities of Leeds and Bradford.

According to Maritime, construction at the Liverpool port site will commence this month. The new storage yard accompanying the enlarged premises will offer a wide range of loaded container handling for up to 2,000 TEU. Brand new Sany reach stackers, already on order, will be arriving on-site in time for the project completion in November 2022.

The 30-year lease deal will extend the geographical reach of the Port of Liverpool further into the English midlands by supporting both hauliers and Maritime’s rail freight activities. “This significant investment, which marks the beginning of a strategic collaboration with Peel Ports, heralds an exciting time for the company in terms of our growth”, said John Williams, the Group Executive Chairman, Maritime Transport.”

The port of Liverpool has been in the news for all the right reasons of late. The port has been expanding, and several plans have been brought forward, from the vital to the fanciful, with even a new tunnel suggested to serve the port. “This is a major commitment that is yet another highlight in the Port of Liverpool’s exciting evolution,” said David Huck, Chief Operating Officer for the Peel Ports Group. “It links perfectly with our strategy to extend our multi-modal connections providing better links beyond our current hinterland. We’re also pleased to see one of our important customers continuing to enjoy success, and together, we are going from strength to strength.”

Other significant announcements for the Port of Liverpool include the recent completion of the ‘Liverpool2’ deep-water container terminal and new multi-modal rail connections.