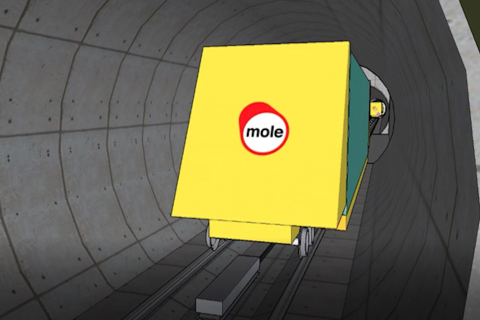 An ambitious underground freight transport tunnel has been proposed as an answer to access issues at the rapidly expanding Port of Liverpool. The project would provide an alternative to a road access scheme, which campaigners say will destroy a local beauty spot, and worsen environmental pollution in the heart of the city. The tunnel would connect the port with an off-site facility which could be expanded to meet future demand.

The environmental agenda may well put an otherwise fanciful proposal on the table at the Port of Liverpool. With intermodal traffic growing, and space to handle cargo on the dockside limited by the surrounding urban landscape, a road proposed by the UK government’s highways agency may not be the sustainable answer. By going underground, there could be a way for the port to connect to a scaleable terminal inland, and, say campaigners, it would better connect the port to road and rail handling facilities, thereby ensuring the economic future of the docks.

The docks at Liverpool are currently on a boom, the likes of which have not been seen since the 1960s. To cope with intermodal demand, a new access road is currently under consideration. However, to the dismay of nearby residents, the proposed road will cut straight through a local park, and offer no alternative to a stream of heavy goods vehicles serving the port. Last year, a report from engineering consultancy ARUP, proposed alternative, if radical, solution.

ARUP, in their Inland Port and Connectivity Concept document, highlight the work of Mole Solutions, a Cambridge-based logistics technology, who offer a concept alternative, which might be categorised as a modern day equivalent of the traditional department store cash transfer tube – except this would be on an intermodal scale. They have spoken with stakeholders and want to explore how their technology could be applied to the Port of Liverpool.

The concept allows for future expansion

A rail-based underground freight pipeline would see containers transferred between the port and a purpose-built inland hub, where connections could be made with the rail and road network, removing the need for heavy goods vehicles to drive directly to the port entrance. The environmental benefits are obvious, and the inland hub could be sited to allow for future expansion, which campaigners hope will prove attractive to the port operators, customers, and road and rail operators.

Campaigners, who have been opposing a road-based solution, say that initial findings have estimated that the cost of such a scheme would be comparable to road construction. In the plan, the pipeline would be electrically powered and zero emission at point of use. As a stand-alone project, it would not require connection to the national rail network, freeing rail freight operators to serve the port more conveniently.

A system fit for the twenty-first century

“We were happy to talk about our technology and the possibilities that exist in relation to transporting container freight”, said Stuart Prosser, the technical director at Mole Solutions. “The need to maintain an effective supply-chain and to decarbonise our infrastructure have never been more relevant, with the climate emergency dominating the news agenda.”

Going on, Prosser saw further potential to deploy the freight pipeline concept.“The port-city conflict is common across the globe”, he said. “We believe we have come up with a solution. We want to help and both we and our delivery partners are ready to help. We would welcome the opportunity to work with Peel Ports [the operators at the Port of Liverpool], the Department for Transport [who back the road-based scheme] and Sefton Council [the local authority] to develop and deliver a system fit for the twenty-first century and beyond.”

The answer to prayers and good for business too

While Liverpool already has rail connections into the port, and Network Rail recently worked on better access, this concept allows for rail freight to play an even bigger role in future development, particularly serving intermodal traffic, an identified growth vector. UK government mandated targets for zero emissions will mean significant reductions in transport, with road haulage and diesel traction being targeted.

“It is no exaggeration to say that it represents the answer to local people’s prayers”, said Stuart Bennett on behalf of the Save Rimrose Valley campaign. “It blows apart the myth that this road proposal is the only option to cater for the Port of Liverpool’s expansion. It isn’t. We hope they grasp this with both hands for the sake of business, our communities and the future of our planet.”

What will stop existing HGVs continuing to use the roads even if this tunnel is built? If compulsion is the answer this can be done now, with trains using the existing line to ferry containers to a new transfer hub, or even better, to more distant depots. Once the existing rail connection reaches capacity, perhaps we can then consider such schemes.

What are the Steel carrying wagons pictured in the Port ? A new flow or a trial ?