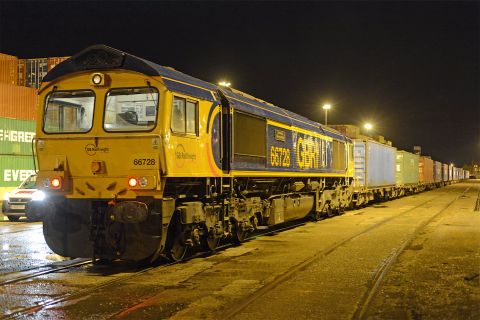 The UK government has announced that final works on the 8,3 million pounds (9,2 million euros) Bootle branch rail line upgrade have been completed. The works deliver a doubling of freight train capacity to and from the Port of Liverpool, according to the Department for Transport (DfT), who funded the works. The new twin-track layout upgrade allows up to two freight trains an hour in each direction, meaning more trains will be able to meet predicted import and export demand for rail freight for the coming decades.

Work on the track along the Bootle branch line, serving the Port of Liverpool, has been a long-term project. The track reopened to freight traffic in September 2021, and ancillary works are now complete. The upgrade alleviates pressure on the pinch point between the busy West Coast Main Line and the Port of Liverpool by doubling a 400-metre section of singletrack.

According to the DfT, the works have enabled an increase in the number of goods that can be transported. They say this makes an important contribution to the national economy. “It will do so without adding more lorry journeys, congestion and emissions to our road network”, said a statement. “Moving goods by rail results in just one-quarter of the equivalent carbon dioxide emissions compared to road, and rail freight supports the country in meeting our targets for net-zero.”

The announcement was timed to coincide with the publication of the Integrated Plan for Rail, which made public the government’s revised proposals for rail development in the north of England and the Midlands – including the cancellation of a dedicated high-speed line linking Liverpool with Manchester and Leeds.

The government conflated the works into their political commitments to ‘levelling up’ the economy of the UK. However, Phil James, North-West route director at Network Rail, confined his comments to the work in hand and the collaboration with the operators at Liverpool. “We have been delighted to work with Peel Ports and the Department of Transport to remove a bottleneck on the rail network for economically and environmentally important freight trains”, he said. “With a new 400-metre double-tracked railway successfully in place, it gives the Port of Liverpool increased capacity to transport more goods by train. This will cut carbon emissions and reduce congestion by taking lorries off our roads, helping the country build back better after the pandemic.

“This is truly transformational news for the Port of Liverpool and the future of sustainable supply chains, said David Huck, Managing Director of Peel Ports. “The new rail line upgrade enables even more choice and connectivity for customers by providing four departures per day from the container terminal. This is in addition to our long-standing bulk rail services. We can now reach the central belt of Scotland and East and West Midland destinations with ease. Combined with our significant investments in infrastructure, our people, processes and technology, the news further strengthens the proposition for Liverpool as a strong, viable alternative location to southern ports.”

There is room for modal shift in favour of rail freight. According to the DfT, essential goods that pass through the Port of Liverpool and benefit from this rail freight upgrade include shortbread and whisky, exported to American markets by DB Cargo.

A new GB Railfreight service between Liverpool and the East Midlands also launched in late 2020, aiming to take 20,000 lorry journeys off the roads and avoid some of the most congested motorways in the country.