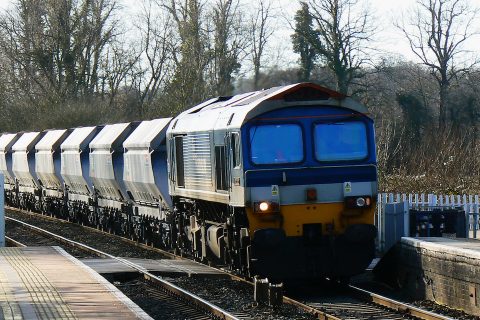 The continuing growth of the construction industry in London has prompted Hanson to open their second rail-served facility in the capital. The former coal yard at West Drayton, just north of Heathrow Airport, is convenient for the rail and road links into and around the capital. It would also be in a prime location to serve expansion works at the airport if they come to fruition.

Hanson’s new depot is already proving popular, not least with environmentalists, who note a reduction in heavy construction traffic. “The move is part of our strategy to improve our network of rail-connected depots and will reduce vehicle movements and associated CO2 emissions”, said a company statement. “The material was historically transported by road from Oxfordshire and east London to meet customer needs”.

Hanson says the raw aggregates will be supplied from their Whatley and Tytherington quarries in the southwest of England. The depot is initially expected to handle around 250,000 tonnes of material a year. The plan is to raise that handling capacity to approximately 400,000 tonnes within the next three years.

Serving everything from shops to sewers

London is by far the biggest construction market in the UK. Many high-profile projects are underway, and almost all of them are being supported by bulk rail freight. Projects as diverse as the Elizabeth Line (also known as Crossrail), the redevelopment of Brent Cross shopping centre, and Tideway, the new London sewer system depend on rail freight.

James Whitelaw, Hanson Aggregates managing director, heralded the opening to expand Hanson’s UK rail depot network further. “The opening of our new facility at West Drayton Coal Yard is part of our commitment to optimise logistics and minimise road haulage between depots and our customers”, he said.

West Drayton is the second rail depot Hanson has opened this year. The announcement comes just a few months after the opening of Tuebrook, near Liverpool. The revived facility took its first delivery of material in early March. Hanson entered into a contract with GB Railfreight to transport materials from locations in Cumbria in northwest England. For West Drayton, the company will rely on relationships and experience from Freightliner, who have been active in the southwest of England for many years.