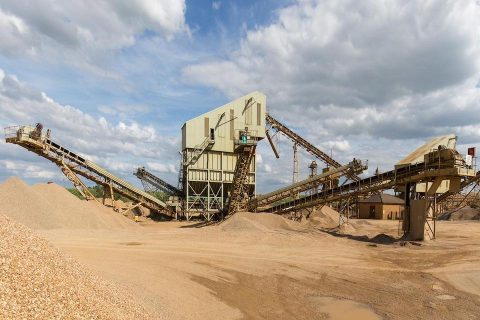 UK rail freight operator GB Railfreight is cleaning up in Cumbria with a new contract. After successful trials, GB Railfreight (GBRf) has just announced a two-year deal with Hanson, the multi-national supplier of heavy building materials to the construction industry. The contract calls for GBRf to run approximately twice-weekly bulk aggregates trains from Shap Quarry in Cumbria to Tuebrook in Liverpool. The quarry, familiar to travellers on the West Coast Main Line, will supply raw materials to a distribution point set up on former railway land in the heart of Liverpool.

With the construction boom centred on the south east of England, the collaboration between GBRf and Hanson to deliver materials to the north west of England may come as a surprise. However, the new flow, from the large facility at Shap, in the Cumbrian countryside, to the port city of Liverpool, will serve a growing customer base around the region. GBRf will operate an average of two trains a week, having successfully trialled two services already over the past week. Each train is expected to convey approximately 1,800 tonnes of aggregate material.

GBRf and Hanson have developed the Liverpool terminal from under-utilised rail land at the Merseyside site. The aggregates company already has several sites in Liverpool. The city is already feeling an upturn in traffic as a direct result of changed trade routes after Brexit. The rail flow will obviously positively impact on long-distance road traffic, and should reduce construction traffic in the city. This is not the first collaboration between GB Railfreight and Hanson. The rail freight operator is already familiar with the site at Shap, being the principle carrier of aggregates from Shap to Hanson’s site near Wigan in Greater Manchetser.

“Having developed this new terminal, we have put the land to good use and will strengthen our deep commercial ties with an additional service”, said John Smith, GBRf managing director. “Given the economic picture remains mixed, it is great that our industry and the wider infrastructure sector continue to show leadership which will steer the country back on track after COVID-19.”

Movement of aggregates for the building and construction industry remains an important and growing flow for the rail freight industry. The collapse of widespread coal transport over the past ten years has left a hole in operations, and a legacy of redundant rolling stock. The aggregates industry offers a ready-made alternative, with former coal trucks relatively easily adapted to carry these bulk loads. A contract was signed just last week by the UK specialist rolling stock manufacturer WH Davis to undertake exactly that on a rake of almost 50 former coal hoppers.

Meanwhile, Hanson is looking forward to further strengthening ties with the rail freight industry. James Whitelaw, their managing director, expressed delight at the prospect of moving more bulk by rail, and away from the already congested Merseyside road network. He said this was their overall direction of travel. “This is an exciting new venture for us in conjunction with GB Railfreight and is part of our plan to grow our UK network of depots.”

Innovative reuse of old facilities in the new railway will be on the agenda at RailTech Europe 2021 // Live, at the end of this month. Join the debate, online and for free.