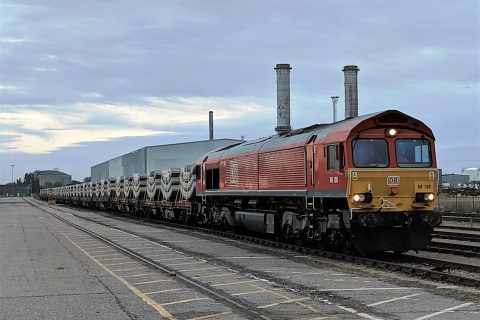 A vast new tunnel is being built under London, and although it will carry no trains when completed, it will be rail freight that makes it happen. This is the answer to London’s sewerage problem, and the answer is rail freight. How else could thousands upon thousands of precast tunnel sections be delivered to the vast Thames Tideway Project, if not by rail.

Solving London’s sewerage problem by rail does not necessarily mean tanker trains of particularly unpleasant cargo, lined up to deal with whatever the under street pipes cannot. However, it does mean deliveries of materials for a much more eloquent and frankly less smelly solution. Huge new tunnels under the streets, collectively known as the Thames Tideway Project, are being prepared to take all that London’s toilets can throw at them. Before all that, and with the help of rail freight, barges, and a convenient port, all the materials that have to go in, and all the material that has to come out, is being handled without a stream of lorries pouring down London’s streets.

Thirty-five miles from Central London (56 km) Thamesport sits at the mouth of the River Medway, nearby the historic naval dockyards. The intermodal containers and the bulk cargoes may not be as glamorous as the three-masted warships tied up at the quaysides, but Thamesport is playing a part that will be every bit as historic in the future of London’s waterways – and it all started this week.

The first train has arrived at London Thamesport with primary tunnel precast rings for the Thames Tideway ‘Super Sewer’. It is a vast, unglamorous, but utterly essential upgrade to London’s sewer network to cope with demands well into the next century, and it will take train loads of materials to complete.

London was among the first industrialised cities to have a comprehensive sewer system installed. The system brought sweeping changes to the health of the population, and banished the stench of the River Thames. The system was world leading at the time, but that also means its pipes and tunnels are now 150 years out of date.

With London’s population now more than double the designed maximum for old the system, there are occasions when everything resets back to the days before Queen Victoria. Pulling the toilet flush sends something unpleasant directly into London’s river without any processing at all. Thankfully, the Thames Tideway project is set to put London back where it belongs – as the sewer capital of the world.

Paul Davey, head of corporate affairs at Hutchison Ports UK, the owners and operators of London Thamesport, observed the first arrival. “We welcome this first train move for Tideway at London Thamesport”, he said. “This move demonstrates clearly London Thamesport’s prime advantages as a multi-purpose cargo handling port. With an excellent combination of deep-water and multimodal rail, barge and road connections to London and the South East, London Thamesport is ideally located to serve the construction sector and major infrastructure projects.”

DB Cargo is providing the motive power for the tunnel section moves. 6000 precast rings will initially be transported by rail from the manufacturing plant in Lincolnshire and will eventually leave the port by barge and road, destined for the main East and Greenwich sections of the Tideway project.

The contractors consortium, CVB, say that around half of all the tunnel rings will be transported by barge to the sites. Neil Grosset, deputy project director for CVB, says the combination of rail and barge was delivering a significant reduction in the CO2 levels generated from the project. “We look forward to working in partnership with the excellent London Thamesport team who have demonstrated their experience and capabilities in successfully handling similar major infrastructure and construction related projects across London and the South East”, he added.

Preparatory work on the project began in 2015 and construction is now underway at twenty-four sites in London. Completion is anticipated in 2024. The entire project is budgeted at nearly five billion British pounds (around 5.5 billion euros).

London has a long and fragrant association with its waste management. Most famous of all is the wide boulevard on the north bank of the River Thames. Very few of the visitors and Londoners alike, who stroll along Embankment, past the many world-famous sights, are aware that they are walking along the paved roof of the main artery of the nineteenth-century sewer network, that pumps London’s waste downstream to treatment works that are the forerunners of the Tideway project. Anyone who thought Crossrail was the most important tunnel in Central London, may need to think again.