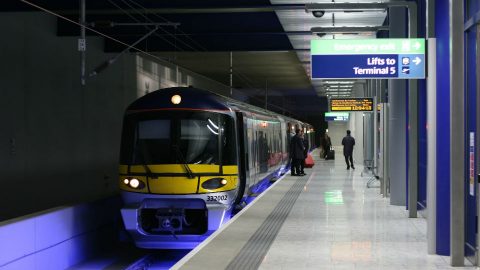 High octane deliveries by rail are now part of the daily flight plan at London Heathrow. The airport is sky high in all the vital aviation statistics, including passenger numbers and cargo handling, but it is also frequently in a holding pattern for ground transportation, with roads around the perimeter congested with other west London traffic. That is bad news for tight scheduled airlines who depend on punctual deliveries of everything from catering supplies to passengers and, possibly most importantly, almost constant tanker trips of aviation fuel.

Now, however, scratch around 20 per cent of those road movements, as rail deliveries are taking the pressure off the notoriously busy and often gridlocked motorway network around the airport. Railfreight Consulting, a ten-year old specialist company, headed by former GB Railfreight deputy MD Ralph Goldney, has been recognised at a recent awards ceremony in the UK for brokering a partnership that is delivering up to three trains a day to the airport’s dedicated fuel supply facility.

“There is a spur from the Great Western Mainline, the Colnbrook Branch”, says Goldney. “It runs discreetly under the M4/M25 motorway network into the fuel supply facility operated by Total. Most people probably don’t see it and don’t realise it is there, but it is a vital part of airport operations.”

The former lightly-used passenger line also handles aggregates traffic, but its new-found importance to the airport has made a success of the fuel train operation, now celebrating its first anniversary. Reducing road movements has gone down well with the community and with the local authorities too. “It is great to see how rail projects provide effective solutions to future proof infrastructure supply chain and prove the effectiveness of rail over other forms of transport”, noted David Strassburg, a commercial manager at Transport for London.

Putting rail into the fuel supply side of airport operations has been considerably more dynamic than plans for passenger rail expansion. The simplicity of repurposing the Colnbrook Branch is in contrast to the complexity of passenger handling requirements. The dedicated Heathrow Express and Crossrail (Elizabeth Line) services from the west of London currently make exclusive use of purpose-built tracks connecting to the Great Western Mainline two kilometres east of the Colnbrook junction, and deliver passengers to three different stations within the 12 sq km airport site.

They may eventually be supplemented by further rail development which will allow through running from the west of England. London Underground services also reach all terminals through a loop of tunnels. Several proposals exist to develop rail connections from the south of the airport. Suffice to say Network Rail have their hands full, and probably welcome the relatively easy win of revitalising the Colnbrook branch.

While fuel may be less combustable than passengers, and will be content to be piped to the apron, the logistics challenge for freight is always in bringing together the partners. “British Airways are the ultimate customer,” says Ralph Goldney. “BP are the fuel supplier and the logistics come from VTG, who have provided two rakes of wagons. Freightliner put in the motive power. Network Rail are in there too, responsible for permanent way infrastructure.” It has been worth it, but it’s taken quite an effort to get this collaboration between aviation and rail freight into the air.