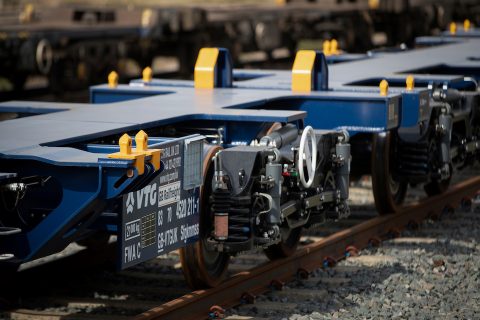 Hamburg headquartered VTG, the large international wagon hire and rail logistics company, has started delivering on an order of more than 80 triple-sets of their Ecofret2 intermodal container carriers. They’ve called the recent delivery a milestone in their partnership with GB Railfreight. The first examples of the highly-developed wagon sets were handed over at an official ceremony at GBRf’s recently opened administration centre at Peterborough, just off the East Coast Main Line.

VTG Rail UK (VTG), based in Birmingham, made a formal hand over on 8 April at GBRf’s Peterborough site. Commissioning has been underway since then. GB Railfreight (GBRf) say its Ecofret2 triple-container flat wagon sets, will be used to support their growing demand for intermodal services. Both parties say the event was the culmination of a considerable amount of work on a longstanding and multi-million-pound partnership.

The wagons are the first of an order for 252 units. They will be formed into 84 triple-wagon sets, that will be delivered throughout 2021. It is anticipated theywill soon be busy running intermodal goods to and from ports across the UK.

The Ecofret2 is the latest innovation in maritime container transport and a revolutionary addition to VTG Rail’s fleet. With enhanced design features over the existing Ecofret, it now includes a brand new, track-friendly ‘TF20’ bogie and braking system with enhanced dynamic ride performance and additional mounting points for increased loading flexibility. The original Ecofret was, say VTG, a game-changer in encouraging modal shift. The new generation is intended to further to maximise the benefits for freight operating companies.

The key benefits of the Ecofret2 wagons are that they avoid the need for empty spaces, which are so often seen on trains made up of 60-foot deck length (3 TEU) container flats carrying a single 40-foot box (2 TEU). These empty spaces are wasteful and create considerable turbulence when running at 75mph, which increases drag and fuel consumption. Ecofret2 platforms are fitted with a new bogie incorporating rubber suspension components and hydraulic damping, giving an improved dynamic ride. They also feature additional container mounting points on the outer platforms, meaning that either two 20-foot or one 40-foot box can be carried on all platforms giving maximum loading flexibility to customers.

The new wagons will be built at WH Davis, the only operational independent freight rolling stock manufacturer in the UK. Their Shirebrook site in the English East Midlands represents the last remaining example of the once very extensive UK wagon manufacturing industry. WH Davis specialises in hi-tech manufacturing and modification. Their business is based on their expertise in the field, and their ability to take on orders that do not make economic sense for the mass manufacturers in Eastern Europe and Asia. The VTG-GBRf order represents a significant coup for the British company, and will keep them busy for much of the rest of this year.

“The Ecofret2 represents a step-change in efficiency and design for intermodal rail freight and we are delighted with the end result”, said Colin Denman, the managing director for VTG Rail. “The enhanced wagon design enables further cost savings when moving the larger 40ft container units, which can be passed on to deep-sea container customers, encouraging more companies to put their goods onto the railways.”

It may be difficult to mislay a 6TEU capacity triple-coupled unit, but the possibility has been overcome nonetheless. As with all new VTG wagons, each unit carries the company’s ‘Connect’ GPS-based telematics system, allowing a range of monitoring and tracking protocols. VTG is also a partner in many other innovations, including the Digital Automatic Coupling (DAC) programme, involving several European interests and operators.

“As we grow GBRf’s intermodal business, we couldn’t ask for a better partner than VTG, which is at the cutting edge of the industry”, said John Smith, the managing director of GB Railfreight. “The whole sector has a huge role to play as we look to move more freight by rail in order to remove carbon emissions.”

On the original Ecofret design, the outer platforms could each carry one 40-foot container (2TEU) and the inner platform either one 40-foot or two 20-feet (1TEU) containers, with payloads of up to 61 tonnes.
The first Ecofret wagons were launched into UK service in 2012 in both triple and twin configurations.

Ecofret has been running with most of the major UK FOCs for the past seven years and is now ubiquitous across the UK’s intermodal scene. Other UK collaborations involving these partners have included re-purposing redundant coal hoppers, optimising them for the fast-growing aggregates traffic sector.