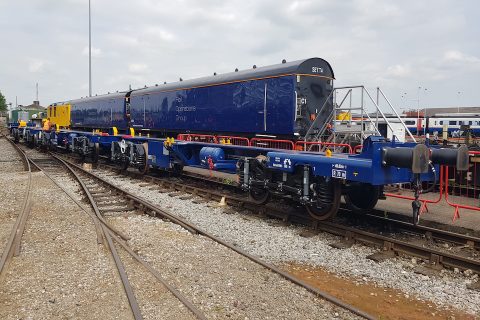 UK manufacturer WH Davis welcomed representatives from leasing company VTG and operators GB Railfreight to their manufacturing base in England and their production facilities at Langwith Junction, near Mansfield. The reason of their visit was an inspection of the hi-tech ECOfret2 intermodal wagons. Completed wagons are due for testing at the extensive facilities of Loram UK in nearby Derby.

The order for 84 of the triple-wagon sets has been a significant boost for the only remaining independent wagon manufacturer in the UK. Overcoming a raft of strong European competition, the company’s reputation counted in their favour, and in the last few days their customers have been along to see that they live up to expectations.

A prototype wagon set has already been delivered from WH Davis to Loram UK, where it is being prepared for rigorous testing. When the manufacturing run and testing is complete, the finished wagon sets will be formally handed over for acceptance by VTG UK, who have a leasing agreement in place with GB Railfreight. “WH Davis are proud to be involved in such a prestigious project with these leading UK rail freight businesses”, said Les Bryant, group engineering director for the company.

The wagon sets are an evolution of the versatile ECOfret design, which has already been in service for almost a decade. The new design better reflects the demand for 40-foot container transportation, and reduces the potential for wasted space on intermodal trains. The environmental and economic advantages are readily apparent.

Improvements for the ECOfret2 evolution include a new bogie incorporating rubber suspension components and hydraulic damping, giving an improved dynamic ride, designed to meet the requirements of emerging rail regulations. The load beds also feature additional container mounting points on the outer platforms. Either two 20-foot or one 40-foot box can now be carried on all platforms.

Demand for intermodal capacity continues to rise, particularly at UK ports, where railfreight is playing a growing logistics role. The necessity to clear quayside as quickly and efficiently as possible is not new, but the challenge is increasing in line with the increasing average size of container ships that berth at UK ports. Efficient use of all available load space on trains is an obvious advantage.

After the ceremony at WH Davis, Smith returned to Peterborough for a further function – sealing a time capsule in the foundations of the new building. The capsule was not quite intermodal sized, but contained a representation of the GBRf business and UK society in 2020.