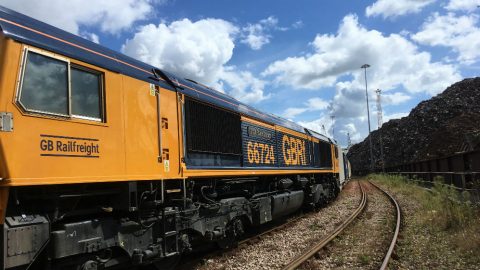 GB Railfreight, currently the third-largest rail freight operator in the UK, has signed a new multi-million pound contract for the lease of an additional 52 Ecofret2 Intermodal wagons. The second generation multimodal career rake is to be manufactured in the UK by WH Davis, and the leasing deal will be handled by VTG Rail UK Ltd, the domestic division of the multi-national private wagon hire company.
The news comes after GBRf recently announced the leasing of 32 Ecofret2 triple wagon sets, also leased from VTG, which will enter service in 2020 and 2021. The deal, says GBRf, highlights their commitment to investment in the future of the Intermodal rail freight sector.

The deal completes the leasing of 84 new-build wagon sets, announced back in January, jointly by VTG and the manufacturer WH Davis. The rolling stock will be built at their plant in Shirebrook, in the English East Midlands. Operations and maintenance will be there responsibility of VTG at their Birmingham and Peterborough locations. Production has begun, and RailFreight.com understands the first set is already under test.

Rail freight will play an important role in supporting a green recovery, says a GBRf statement. “Increasing the proportion of goods carried by rail has an important role to play in helping the UK to deliver on its decarbonisation agenda.”

Fitted with a new, more track-friendly bogie, the Ecofret2 builds on the efficiency benefits provided by the original Ecofret since its introduction in 2013. Ecofret wagons allow for more containers to be carried per train, leading to greater load efficiency, and reducing transport delays.  The wagons also help to improve the spacing of containers reducing turbulence when trains are traveling at speed and reducing fuel consumption.

GBRf has been working with VTG for more than 10 years, and their managing director, John Smith, said he looked forward to continuing the relationship. “Adding even more Ecofrets to our fleet is part of our continued growth plan. As a business, our goal is to offer the best possible service to our customers and we are investing heavily in the wagons which will enable us to expand our operations, whilst also providing the extra freight capacity the industry really needs.”

Smith was keen to evidence the part played by the rail freight industry as a whole in getting the British economy back on its feet following the current pandemic crisis. “We will continue to do our bit to keep the economy on track”, he said.

For their part, VTG are more than happy with arrangements. Rob Brook, their UK head of rail called the new fleet the next generation of container wagons. “Our longstanding relationship with GBRf has seen the introduction of numerous new wagons, each helping to support their expansion for more than a decade. He also emphasised the next-generation technology that supports the fleet in operation. “As with all new VTG wagons, Ecofret2 will be fitted with our ‘Connect’ telematics system, part of the traigo platform, which allows users to subscribe to a range of GPS-based tracking and monitoring services.”

With government imperatives to reduce and eliminate carbon emissions from industry and the logistic chain, the new fleet should be arriving just in time for a busy working life cycle.