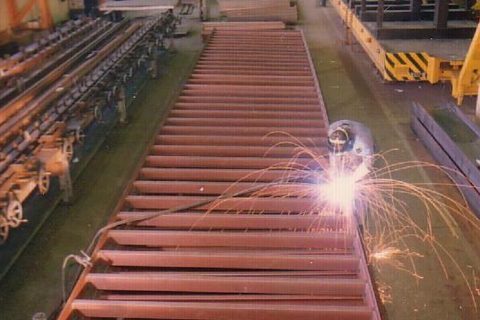 The only remaining freight wagon manufacturer in the UK, WH Davis, has secured what they describe as a major contract with Beacon Rail Leasing. The company will convert 46 former coal hopper wagons into brand new high-capacity box wagons. The work will be conducted at WH Davis’s site at Langwith Junction, in the English Midlands, during the rest of 2021.

WH Davis has considerable experience in the field of repurposing redundant rolling stock, and has made use of the UK’s fleet of redundant coal carriers. Their re-engineering has won high praise in the industry, and is often called the ultimate in recycling. This contract saves another rake of wagons from dereliction and scrapping.

Beacon Rail Leasing, the rolling stock company headquartered in Luxembourg, has ordered a rake of 46 high-capacity hopper wagons from the independent UK manufacturer WH Davis. The Midlands-based English company, whose reputation outweighs its modest size, is calling this order a major new contract. Certainly, with Beacon Rail having interests across the European and UK markets, it is something of a coup for the British company, won in the face of stiff competition. Beacon Rail Leasing’s current portfolio includes 346 locomotives, a 1,000 freight wagons, and 575 passenger train vehicles and intercity coaches on lease across Europe.

The virtual elimination of coal traffic on the UK network has left a legacy of redundant rolling stock, which WH Davis has proved adept at repurposing. This contract involves the recycling and overhaul of key components including bogies, wheelsets and brakes, from HHA coal hoppers for re-use on the WH Davis MegaBox design. The commercial demand for the wagons reflects the growing aggregates and infrastructure sectors in the UK, and the need to switch to rail transport, especially in urban areas, where road emissions are less and less tolerated by communities, local authorities, and government legislation.

Although a relatively standard rolling stock design, the WH Davis box wagon has a capacity of 75 cubic meters, which is about 25 per cent greater than most conventional UK box wagons. The increased capacity will allow the customer to use the boxes with a broader range of products. The design has been developed by WH Davis’s in-house team, and will be manufactured and assembled at their Langwith Junction facility. Asset repurposing projects of this nature allow cost-effective solutions to be realised by re-cycling existing equipment and components.

As a critical part of the supply chain, WH Davis has developed a new relationship with specialists Yellow Rail, based in nearby Derby. They will be playing a key part in the project by managing the removal and overhaul of the re-cycled components. This includes the bogies, wheelsets and brakes, along with recycling of the HHA body. Andy Kevins, the managing director of Yellow Rail, is looking forward to the collaboration. “we are delighted to have the opportunity to support WH Davis on this high-profile project, which demonstrates the sector’s ability to adapt its assets to changes in market needs.”

“This project shows the depth of experience, knowledge and skills available in the UK Rail Freight sector, to deliver cost effect projects for customers, said Les Bryant, engineering director for WH Davis Group, shortly after signing the deal. “The ability of a broad range of UK suppliers with specific skills, continues to help the UK economy, along with the bonus that the use of recycled components helps to reduces the carbon footprint against the production of totally new wagons.”

“This contract marks the first collaboration between Beacon Rail and WH Davis to support the reuse of HHA Coal Hoppers into the sustainable WH Davis Megabox design”, said Adam Cunliffe, CEO of Beacon Rail. “This project is a significant development and represents the close cooperation and agility of both companies”. Beacon Rail recently repatriated several class 66 traction units to the UK to serve the growing demand in the bulk sector.

The technical approvals process will be handled by TUV UK, part of the international TUV group, who are also based in Derby. Complex delivery of highly advanced takes on traditional designs is part of the discussion at RailTech Europe at the end of March. The event is online this year, for the first time in its fifteen year history. Registration is free.