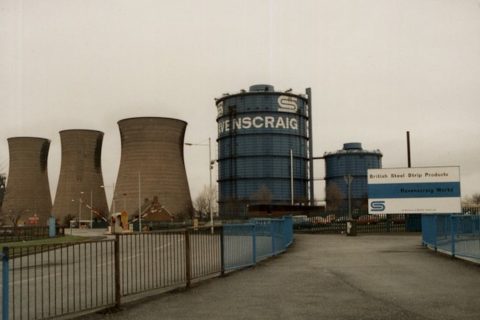 New freight terminals planned for Scotland and England have had mixed responses from the neighbours. In central Scotland a new proposal occupying part of a former steel works has met fierce opposition from local residents. Meanwhile, a new terminal on the site of a former iron works in England is set to progress to planning approval from the local authority. Both sites share similarities and make similar claims for job creation.

Advancing the cause of rail freight has met with very different views in two parts of the United Kingdom. In Motherwell near Glasgow, once home to the Ravenscraig integrated steel works, proposals to build a modern rail freight terminal have met with an angry response from residents on adjoining parts of the redeveloped site. By contrast, at Stanton, midway between Nottingham and Derby, planning is moving ahead to redevelop a former iron works industrial site, while housing expansion is planned for a greenfield site elsewhere in the community.

Ravenscraig was at one time the by-word for industrial Scotland. The vast industrial complex, which supported employment in the neighbouring Motherwell and Wishaw communities, was, until its closure in 1992, the largest steel manufacturing facility of its kind in Western Europe. The site, and the communities are vastly different now. Ravenscraig is designated as a ‘new town’ based on residential and hi-tech development.

In an echo of its heavy industrial past, Ravenscraig could become the latest rail freight destination in west central Scotland. A Scottish-headquartered corporation, the Russell Group, wants to add to its roster of six existing rail freight terminals by building a new facility on part of the site. That has brought an outcry from the new community. According to press reports locally, over two hundred objections have been lodged, mainly from local residents.

In similar circumstances. another former icon of industrial Britain – the iron works at Stanton – is moving towards development. Plans are in hand to make it a rail-connected logistic hub for the East Midlands. The warehouse-led scheme would be the heart of a 200-acre development site, to be named New Stanton Park. Verdant, the company behind the development, say the site would provide potential for employment, commensurate with the old industrial use of the site. The announcement was originally reported in December last year.

The critical difference between the Stanton site and Ravenscraig is the level of redevelopment already undertaken. Stanton remains largely brown field, and yet to be designated for reuse. In Scotland, the Ravenscraig site has been the subject of huge investment, partly to offset the loss of jobs when the steelworks closed. The site now has the atmosphere of quiet suburb, rather than the sulphurous air of heavy industry. Clearly, the prospect of a rail freight terminal has alarmed residents, who fear the peace and quiet will be radically disturbed. Their worry is not necessarily caused by rail operations, but by the logistics movements generated. Russel Group is, after all, most widely recognised for its road fleet, rather than its existing six rail terminals.

Both locations are known for the diverse choice of rail facilities already established locally. Ravenscraig would be entering a crowded market place. Nearby facilities include Freightliner’s terminal at Coatbridge, which has had viability issues in the recent past. There is also the ambitious expansion already underway at Mossend International Railfreight Park.

Both Nottingham and Derby have been significant rail freight hubs in their own right over the years. There are many contemporary facilities already in operation, most notably the successful East Midlands Gateway, adjacent to the airport-freeport with which is shares its name. It should not be overlooked that the HS2 project will also pass nearby.

Public consultation has already begun in Stanton, with the extensive planning process about to be presented to the local authorities. Ravenscraig undoubtedly has a longer path to follow. In either case, there are a few signals yet to be passed before either project has a clear route ahead.