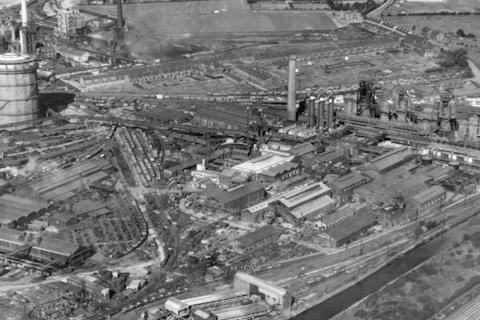 Developers have secured a former heavy industry site situated between the cities of Derby and Nottingham, with plans to establish a rail-connected logistics park. The site is the disused Stanton Ironworks, on the southern edge of the town of Ilkeston. Local reports say the site has been largely derelict since before the turn of the century. The 200 acre (81 hectare) brownfield site is served by a former industrial branch line directly off the Midland Main Line. It is also adjacent to the M1 north-south motorway. Part of the site is already occupied by businesses involved in the plans.

A consortium of developers, calling themselves Verdant Regeneration, have announced their acquisition of the former Stanton Ironworks site, at Lows Lane, a community on the edge of Ilkeston. The developers say the “New Stanton Park” site is just of the current national rail network, but they emphasise the road connections. According to developers, the site is a ten-minute drive from Junction 25 of the M1. In addition to local access to Derby and Nottingham, the site is close to population centres in Leicester, Sheffield, Birmingham, Leeds and Manchester.

Scope of the plan

The town of Ilkeston was known for its heavy industry, epitomised by the ironworks. However, that has all long since closed. The prospect of new jobs created by a logistics park on one of the most prominent brownfield sites is likely to have played a part in the local authority’s approval. The developers say that the derelict ironworks site at Stanton has been sold with plans to transform the land and create “local jobs for local people”. Their plans do include reviving the rail link into the site, which they are already testing.

“The new development plans will reintroduce the use of the railway line whilst developing a range of units that will total two million square feet (187,000 square metres) of industrial space”, say the developers. “New Stanton Park rail has a direct link to the Midland Main Line allowing us to become a key distribution point for materials being imported and exported efficiently throughout the UK and beyond.”

The development consortium has strong local connections. David Ward, director at Verdant Regeneration said the site is hugely significant in the local area. “As local businesses with a strong heritage in the area, we see this as a real chance to create a new legacy for Ilkeston. It will unlock potential for long term business opportunities and future jobs for Derbyshire and the wider region. There are existing private rail links into the site which join into national rail network. Toton Sidings and the proposed HS2 depot are less than a mile away.”

“This provides a great opportunity for taking materials, goods and HGVs off the roads and onto the railway”, added Ward. Operator GB Railfreight confirmed in a number of social media posts that trials had already begun. “With a view to Verdant developing an important logistics, distribution and rail hub in the East Midlands, two trials have now been undertaken. Fully loaded services coming very soon”, was posted earlier this month.

Expanding on the ambitions for the site

The New Stanton Park site has already been identified by Erewash Borough Council as a key part in their long-term plans to restore the area. They say that Verdant Regeneration will work closely with the local authority and all the other stakeholders to provide an environmentally friendly site that also brings regeneration alongside. “This will be achieved by developing New Stanton Park with a mixture of industrial and commercial buildings thus bringing greater employment to the area and utilising the excellent and existing local workforce”, says a statement.

According to Verdant, preliminary work will start early 2021 and the team will look to include an outline planning application to Erewash Borough Council by early Summer 2021. “Working in close partnership with Network Rail and GB Railfreight the first train bringing materials to the site is expected in mid January 2021”, say the developers.

Since 2007, the land has been subject to a number of failed attempts to secure a future for the site that was once a major employer in Ilkeston. Dating back over two centuries, at its peak the site employed over 7,000 people as part of the British Steel Corporation Tubes Division.