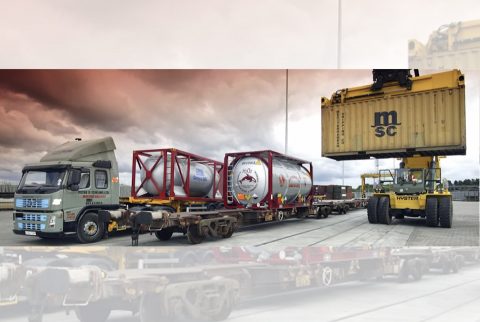 Mossend near Glasgow is undergoing a significant transformation, that will see the terminal emerge later this year as the greatly enhanced Mossend International Railfreight Park. Not only will it be Scotland’s self-styled twenty-first century rail freight park, it will be carbon neutral too.

Operator of the terminal PD Stirling presented work underway on the new electric-traction capable suite of eight new, 800m-long sidings, during a side tour at the recent Rail Freight Group Scottish Conference. The project represents the biggest new rail infrastructure installation in Scotland since the building of the Borders Railway was completed in 2015.

Mossend is an unpretentious suburb of the unassuming town of Bellshill in North Lanarkshire. It is already home to a thriving, 200,000 sq m terminal, just off the West Coast Main Line. Every day it handles a variety of traffic, from steel and bulk cement products, through to intermodal containers and finished cars.

Consultant David Cross, who handles the commercial interests of iPort Rail in Doncaster, is also on board with Mossend International Railfreight Park. “MIRP will work for the business”, he says. “It will benefit the Scottish environment. It will benefit Scottish exports, and it will add value and credence to modern railfreight”.

Cross, who is one of the main speakers at Railfreight Summit UK in Salford next month, said the new terminal, which will be fully ‘Channel Tunnel’ security cleared, could handle up to 16 trains per day. “Electrification is key to the industry”, he said, as the new 200 hectare facility will treble the size of the terminal. “There has been many years of planning with many stakeholders, all of whom are pleased with what we’re doing”.

All the new sidings will be electrified and, in a first for a modern terminal in Scotland, shunting duties will be undertaken by battery electric locomotives, which will eliminate emissions and be quieten down the expanded operations. In other considerations for the neighbours, there are extensive landscape works built in to the project, to maintain and enhance the local amenity.

PD Stirling, in their company statement, emphasis the environmental credentials of the new terminal. “The electrified railhead will put Mossend at the forefront of Scotland’s low carbon freight industry. A new access road to the north of the site will move all associated HGV traffic off the local road network and the development will provide a sustainable green legacy with more than 50 acres of managed community green space”. As PD Stirling operate a fleet of almost 300 HGVs from the site, it is a further benefit that MIRP will be served by a new road link from an adjacent motorway, taking road-related traffic completely out of Bellshill.

The Scottish economy, says Cross, is balanced, in that one container imported is matched by one container out. MIRP will help maintain that balance and potentially improve export potential. “We can dispatch all over the UK and have Europe on the horizon. We are speaking to Network Rail about paths.

This unpretentious North Lanarkshire suburb could have a much higher profile in future, and we don’t mean a comeback for Sheena Easton.

Developments like MIRP are set to become more common, as the sector grows and adapts to modern work practice and market requirements. The RailFreight Summit UK on 7 April in Salford, Greater Manchester, is taking a closer look at economic prospects for rail freight, and its vital role in supporting development and enterprise. Registration for this event is now open. For more information visit the Summit website.