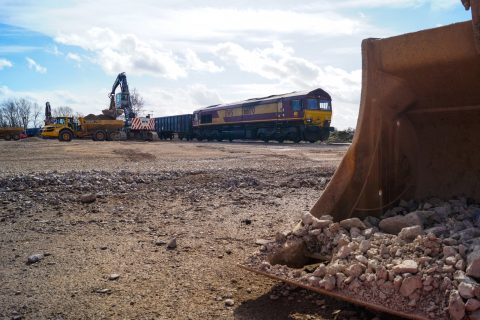 The high-speed rail project, HS2, has celebrated bringing in the one-hundredth train to its Buckinghamshire contraction site in the south east of England. The company says the milestone operations has already taken the equivalent of 7,500 heavy goods vehicles off Britain’s roads. They say that using rail has eliminated over 24,000 tonnes of carbon emissions. The company further claims that the massive civil engraving project is directly helping the British economy and the UK rail freight sector bounce back from the impact of COVID-19.

The HS2 project – building a new high-speed railway between London and Birmingham – has several main construction sites along the 100-mile (160km) route. The company announced a few days ago that the 100th freight train had arrived at the main construction site in Buckinghamshire. HS2 say that the latest figures show that construction of the UK’s new high speed railway has helped the rail freight industry bounce back from the pandemic. Despite the significant contribution already, one hundred trains represents only a tiny fraction of the expected 15,000 fright train movements during the planned ten-year contraction project.

In Buckinghamshire, the first 100 trains, operated by DB Cargo and Hanson for HS2 contractor EKFB, have so far delivered 150,000 tonnes of aggregate for use around the Calvert Railhead. HS2 has been at pains to emphasise the project’s environmental responsibility. Transporting this material by rail instead of road has already taken the equivalent of 7,500 trucks off local roads. New temporary access roads will then be used to move people and materials from the railhead, helping to take construction traffic off local roads.

The temporary 26,200 square-metre Calvert Railhead site is being operated by HS2’s main works contractor EKFB (Eiffage, Kier, Ferrovial and Bam Nuttall). The site will remain the main construction and logistics hub during work on the central section of the new line. Once HS2 is complete, the railhead and temporary access roads will be removed and the site landscaped, leaving only a small infrastructure maintenance depot.

“We are serious about reducing the impact of construction on the local community and promoting sustainable construction methods”, said Ambrose McGuire the HS2 project client director. “I’m pleased to see material arriving into Calvert by rail instead of road. We’ve been working closely with Network Rail, EKFB and the freight operators to make this possible, and to deliver not only low carbon journeys for our passengers, but also cut carbon in construction.”

Despite taking a major hit last year, the amount of freight on Britain’s railways in the last three months is now two per cent above pre-pandemic levels. Construction traffic, including HS2, showed the largest increase, according to figures released by the Office for Rail and Road in their quarterly figures in March. Across the whole HS2 project, 15,000 freight trains are set to haul 10 million tonnes of aggregate to construction sites, taking the equivalent of 1.5 million heavy goods vehicles off the UK’s roads.

Peter Bimson, who is the project director for the consortium of contractors said he was excited to have reached the one hundred freight trains milestone into the Calvert Railhead. “EKFB strives to be at the forefront of carbon reduction in the construction industry, so reducing our impact on the environment and delivering our section of the HS2 project with as little impact as possible is aptly demonstrated through our use of rail over road.”

At the peak of construction, more than 650 people will work at the Calvert Railhead. According to HS2, there will be around 4,000 jobs created by EKFB over the next two years. Those construction professionals will be working a 50-mile (80km) section of the railway between the Chilterns and south Warwickshire, including 17 viaducts and 81 bridges. There will also be three ‘green tunnels’ – designed to mitigate the environmental impact of the line as it passes through the most ecologically sensitive parts of the countryside.

The Calvert Railhead is next to a section of disused railway which is being brought back into use as part of the East-West Rail project which is set to link Oxford, Milton Keynes, Bedford, Aylesbury and Cambridge. The two teams are working closely together on their construction plans, with HS2 set to deliver three bridges and 1.8-mile (3km) of earthworks along the southern edge of the Calvert site on behalf of East-West Rail. Each train arriving at Calvert carries around 1,600 tonnes of aggregates from quarries in the west of England, Around 180 trains are planed during this year.