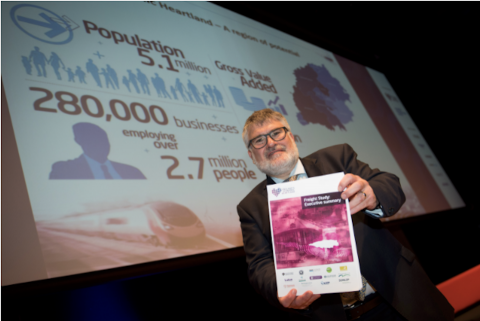 England’s Economic Heartland expects significant growth in the arc between Oxford and Cambridge, but wants rail freight to help. It could limit congestion and reduce heavy goods vehicle traffic by realising its full potential for the region. Rail freight development is vital, including making full use of the East-West Rail project (EWR), says the coalition of local authorities representing a broad swathe of the southern UK.

England’s Economic Heartland (EEH), the sub-national transport body, shared by eleven local transport authorities and representing over 5.1 million people, is in the process of completing a thirty-year strategic vision for the region. With the Midlands to the north, and London to the south, the region is at the heart of economic activity, and intends to take a share of those opportunities. “Our transport system should play an important part in the needs of businesses and individuals at the forefront of investment decisions”, says the EEH Draft Transport Strategy.

Don’t miss the good by waiting on the perfect

The regional transport infrastructure is dominated by a largely radial pattern of strategic networks centred on London. EEH says that the development of the East-West main line, ultimately connecting the corridor between Oxford and Cambridge with a brand new railway, will help alleviate that imbalance. However, the right decisions need to be taken now. “With freight, we must not miss the good by waiting on the perfect”, says Antony Swift, a project lead with EEH. “Whilst there remains uncertainty regarding how the country will emerge after Covid-19, one thing we can rely on is the country’s need to produce, trade and supply goods.”

While the regional strategy seeks to grow economic activity locally, there is awareness that traffic will traverse the region, particularly construction materials heading for the booming South East. EEH encourages using rail to transport materials whenever possible. Rail served construction terminals should be part of the mix too, they say. Other goods could move into London by rail too, suggests the draft strategy.

Despite both HS2 and EWR criss-crossing the region, a pressure group is backing the need for more connectivity. The English Regional Transport Association (ERTA) says a direct west-east link between the communities of Banbury and Northampton would help facilitate greater access to the Daventry International Rail Freight Terminal (DIRFT).

The EEH certainly encourages the further development of strategic rail freight interchanges like DIRFT, to improve capacity, facilitate longer freight trains, and help increase the market share for rail freight. In their consultation, EEH say they want to provide businesses with a cost-effective alternative to road freight by maximising the provision of additional floor space served by rail to increase the attractiveness and competitiveness of rail versus road haulage; supporting the development of designated Strategic Rail Freight Interchanges (SRFI) and smaller rail terminals where practicable.

There is some concern that a lack of action will squander a generational opportunity to reduce the carbon footprint of freight and the region. An end-to-end zero-carbon freight economy is the goal, says Swift. He says that despite technological advances, particularly in road vehicles, the combination of electric rail and last mile road must be considered as the most viable solution.

“It is therefore essential we begin to think of freight decarbonisation as a ‘system’ that promotes medium/long distance trips being made by electric rail with final delivery by lorries powered by clean alternative fuels or where appropriate e-cargo bike”, added Swift. “Decarbonisation through these means requires as much focus on policy as is currently afforded to cleaner traction technology by the private sector.”

The strategy, which is available for review on the EEH website, is now subject to formal consultation which closes at midnight on 6 October. The policy proposals were launched by the Mayor of Bedford, Dave Hodgson, chair of EEH’s Strategic Transport Forum, at a ceremony last year (main image).

As has been recently reported, building company Winvic Construction has secured a multi-million pound contract to deliver the third phase of the DIRFT terminal in Northamptonshire. It’s due for completion in just under a year and will provide 9 kilometres of new rail track and handling capacity for up to 24, 775m-long trains every day, with an emphasis on intermodal handling.