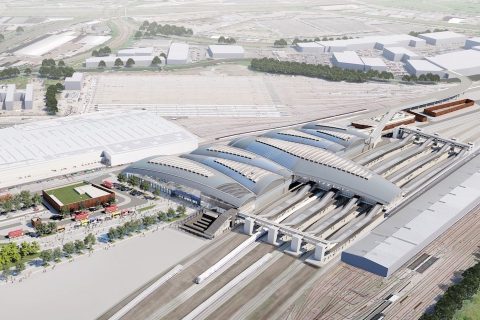 The UK High Speed Rail project, HS2, officially launched its ten-year construction phase last week. The recruitment drive will eventually employ over 22,000 people at over 200 sites along the line, between London and Birmingham. Widely regarded as the biggest civil engineering project in Europe, the primary question for British industry to how to answer such a large call.

Just over a week ago, the very first of around 15,000 planned aggregates trains arrived on site at Washwood Heath in Birmingham. During construction that equates to somewhere between twenty and thirty trains a day, serving the prodigious needs of the one hundred and twenty-five miles (225 kilometres) of new railway, around half of which is in tunnels and deep cuttings. “This is a hugely exciting moment in the progress of HS2”, said Mark Thurston, chief executive of the HS2 Ltd company. “After 10 years of development and preparatory work, today we can formally announce the start of full construction, unlocking thousands of jobs and supply chain opportunities across the project.”

This one project has the potential to grow revenue earning freight train movements by around five percent. Maggie Simpson, the director general of the Rail Freight Group, the independent representative body for the industry, looks at the scale of the project and sees an overarching benefit for the network as a whole. There are however fundamental roles that need her members to fulfil. “This is a huge opportunity for our members who supply building materials and operate freight trains”, she says. “HS2 is a vital project for the UK railway and we are pleased to be able to support its construction.”

HS2 has been engaging with the UK supply chain for a number of years already. They say they do not anticipate any issues. The Rail Industries Association, which represents suppliers to the industry broadly agrees. Their chief executive, Darren Caplan, has been anticipating the main construction phase, and the prospect of several hundred thousand supply chain contracts will also attract the attention of the association’s three hundred members. “HS2 is a fantastic long-term opportunity for the UK, delivering jobs and investment for towns and communities across the country, connecting up eight out of the UK’s ten major cities, serving over 25 stations and connecting around 30 million people”, he said. “It will also spur much needed economic growth at an essential time for the economy. The rail industry stands ready to deliver HS2 and support the national effort to ‘build back better’.”

Among the continuing objections to the project, detractors still say that HS2 is monopolising infrastructure investment. For their part, HS2 Limited say that, to the contrary, they will offer the opportunity for businesses in the UK to expand their capability and capacity. “We don’t see a conflict with other projects. It certainly is not an either or situation”, says their statement. “We are already seeing HS2 being a catalyst for plans to invest in the existing network, especially in the West Midlands where a two billion pound (2.23 billion euro) upgrade has been proposed by Midlands Connect.”

The HS2 railway is a significant investment both in the near and longer-term economic health of the country, notes chief executive Thurston.“We are already seeing the benefits that building HS2 is bringing to the UK economy in the short term, but it’s important to emphasise how transformative the railway will be for our country when operational.”

Rail freight among the big winners

Taken at its face value, investment in HS2 does not necessarily stall investment ambitions from the likes of Northern Powerhouse Rail and Midlands Engine Rail. Add to that the record 42 billion British pounds (47 billion euro) investment programme committed by Network Rail to modernise the existing rail network from 2019 to 2024.

Contrary to any concern over Britain’s ability to cope, HS2 say they will be a catalyst for industry. Given the nature of the project, rail freight is in line to be among the big winners. “We have engaged with the UK supply chain for many years whilst designing and planning Britain’s new high speed railway. We are confident that there is capacity and capability to deliver”, their spokesperson said.

A catalyst for future rail projects

The construction of the railway is now underway, with 22,000 jobs being created and an estimated 400,000 supply chain contracts available. HS2 says it will offer companies in the UK the opportunity to grow and will be a catalyst for future rail projects.

The first fifteen thousand trains on the project may not be particularly high speed, but the stated intention is to fast track the UK economy. HS2 may just deliver down the line after all.

Sale of DB Schenker in sight, but what is the prize?